Joseph and the Amazing Technicolor Dreamcoat, UK Tour for 2022 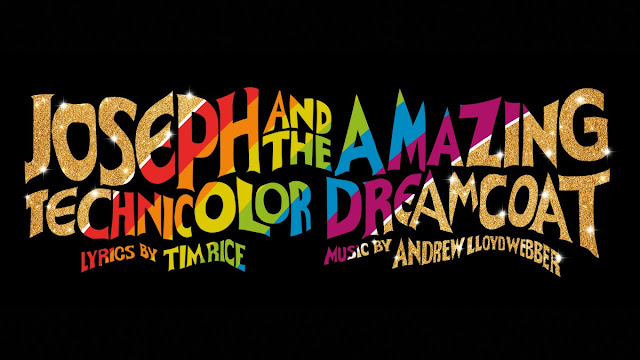 In August my husband and I went to watch Joseph and the Amazing Technicolor Dreamcoat at the London Palladium. It was such a great show that I wanted to write about it but it was only there for a short 10-week run in the summer. So I was thrilled to hear that the Palladium production will go on tour in 2022. At the moment there are limited dates announced, starting in the Spring and continuing through the year. At the time of writing, there are sixteen venues agreed with more to be announced.

You should check the cast list for your chosen venue but it has been confirmed that Jac Yarrow will continue with the lead role of Joseph, Jason Donovan as Pharoh and Alexandra Burke and Linzi Hately sharing the role of the Narrator. In London, we saw Jac, Jason and Linzi in those roles and each was amazing. It was extra special for us as we saw the original production around thirty years ago and Linzi was in that too!

When we went to this show in August, it was our first foray back into a large theatre after Covid and all the closures. We had to queue outside the theatre, we're encouraged to use sanitiser as we entered and asked to wear a mask. We had been told to take a lateral flow test in the 48 hours prior to the show but no one asked to see any proof of this. Ushers asked people to wear masks and a placard was taken around the auditorium prior to the show to remind patrons. Most did wear masks, but many wore them below the nose and of course, they are impossible if you are eating or drinking. We're all waiting to see how things develop and whether masks and testing will continue to be required into 2022. 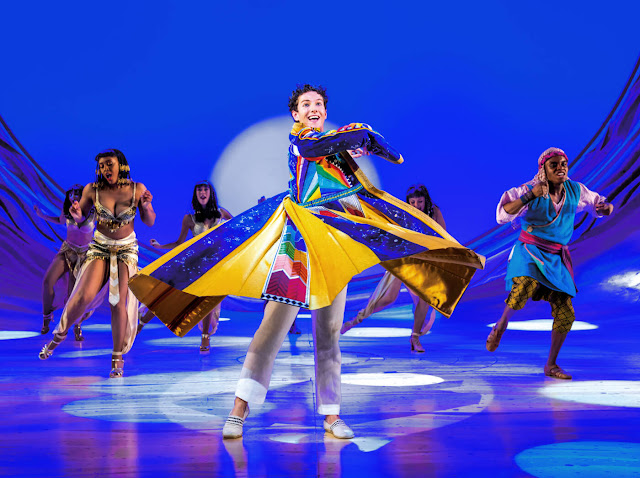 The classic Bible story is told entirely through song with the help of the Narrator. The show follows the story of Jacob’s favourite son Joseph and his eleven brothers. After being sold into slavery by the brothers, he ingratiates himself with Egyptian noble Potiphar but ends up in jail after refusing the advances of Potiphar’s wife. While imprisoned, Joseph discovers his ability to interpret dreams, and he soon finds himself in front of the mighty but troubled showman, the Pharaoh. As Joseph strives to resolve Egypt’s famine, he becomes Pharaoh’s right-hand man and eventually reunites with his family. 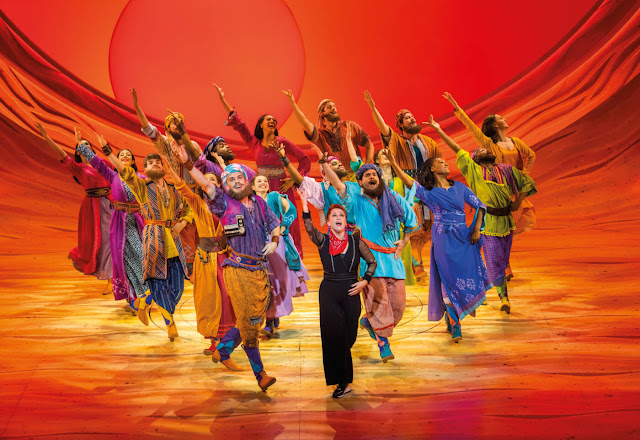 What did we think?

In short, I absolutely loved the show. It felt quite different from the start to the original version I had seen in the 1990s but that was OK. It wasn't worse, just different. I read somewhere it had been bought up to date by Laurence Connor's direction to be relevant to a new generation.  I was surprised to find that the child choir had been scrapped and now there were some children in main roles, such as some of the brothers. This show did feel like more of a 'production' than the one I saw back in the '90s as the staging was bright and bold and there felt like there was a lot of comedy aspects to it as well, particularly with the Pharoh, played by Jason Donovan.

I'm a member of a few theatre groups and it is quite interesting to read that there is a divide on whether people like this production of the show or not. The musical comedy was written by Tim Rice and Andrew Lloyd Webber over fifty years ago and it has been a hit since the start. Some people swear by the version produced by Bill Kenwright and others, like myself are open to different productions and allowing the show to develop and change with time, whilst still holding true to the characters and musicality that Tim Rice and Andrew Lloyd Webster first developed. 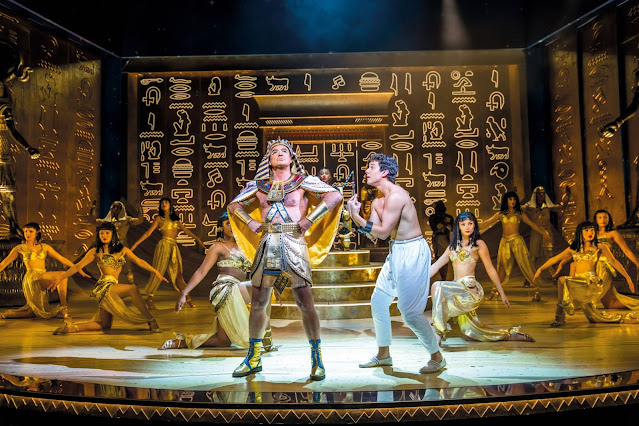 My husband is more of a purist and preferred the original version but he did say this one was still outstanding and it had all the right songs in it still. He was a bit miffed that the song "One more angel in heaven" normally has the lyric "truth & light will never die" but a few times this was changed to "democracy will never die" and as a Christian, this felt a real shame as it took away some of the biblical potency. We mustn't forget that Joseph is a story from the Bible after all.

Both haves of the show were equally as good and I really enjoyed listening to Jac Yarrow sing as Joseph in prison; Close Every Door was so powerful and moving, and then at the end of Act 1 we had the high energy Go, Go, Go, Joseph! number. This was a fabulous way to head into the interval. Jac Yarrow debuted in the role of Joseph in the production in 2019 and he was a great casting decision and by the time we saw him in 2021 he has really come into his own and was owning that role.
Throughout the show there were lots of bits of humour, like Linzi Hately, saying "it was easier 30 years ago". It was also interesting that the narrator played a few different roles and I loved the humour again, when Linzi played Potiphar's wife, she acted out what had gone on but did it in a totally appropriate manner, so it was still family-friendly watching.

There were so many clever staging changes and without too much set too. The use of lights was magnificent and it all felt like there were seamless transitions between scenes. It is when the scenes change from Canaan to the Pharaoh's palace that you really start to see how excellent the sets are. Jason Donovan also delights as the Pharaoh and his rendition of Song of the King is pure Las Vegas gold, not for his amazing singing ability, but for his humour and pure brilliance on the stage. 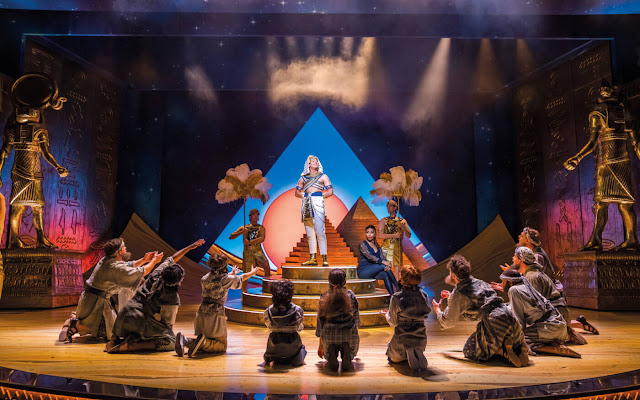 The start of the second half was a good opportunity for the conductor and orchestra to show off their skills and they were really phenomenal, so it was a pleasure to listen to them.

Then as the show came to an end, it was great to have a long encore of around 10 minutes with us all on our feet singing and clapping along to a super medley of our favourite songs from the show. It felt like the perfect ending and left everyone on a high note.

In all, I loved the show and would see it again tomorrow as it was that good. In fact, I think I may take my mum next year for her birthday as it is showing in her home theatre in the summer, which is jolly good luck.

Stage Chat seemed to have a good list of the venues and dates that the show will be on during 2022. 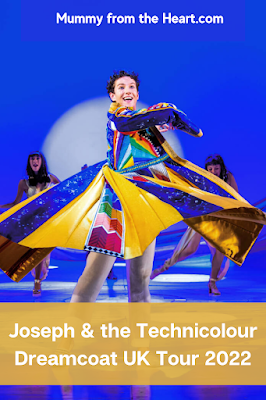 Enjoyed this post? Never miss out on future posts
by following this blog.