School of Rock Musical - The Most Amazing Show 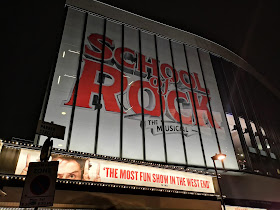 Kids Week
To celebrate London Theatre Kids Week, which runs for all of August my family were lucky enough to go and see School of Rock, the Musical and boy, was it fantastic!  I wrote about Kids Week earlier this summer, so if you're not sure what it is head over and check out my post, but basically most of the big London shows offer a kids tickets (for up to 16 years of age) for free with each adult ticket purchased. Also, if you have more kids than adults in your family you can then get additional half price tickets for the other kids, so all the family can enjoy a show together and it is more affordable.

I've purchased Kids week theatre tickets before and when booking opens it can be really busy and it is tempting to think that everything you want has sold out. but be patient as tickets release back into general sale after a short while, as people request them to be held via the online system and then never complete the transaction.

I'm writing this post on 16th August and I assumed (wrongly) that everything would be completely gone by now, but it is still worth trying to purchase tickets, as just today I saw there were £15 tickets for 'We're going on a bear hunt' and '42nd Street' is just £45. I saw this show late last year and its phenomenal! And these are just two of the shows I saw there with availability for a number of August dates.

Definitely put Kids week in your diary for next year, even if you can't make it this year. Booking opens in early June normally. 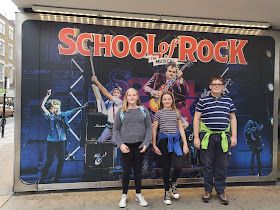 Gillian Lynne Theatre, Drury Lane
The Gillian Lynne theatre isn't one I've heard of or been to before and to be honest when we arrived, it doesn't look that spectacular but I have to be honest from a practicality point of view, it is probably my most favourite theatre of all the London ones I've been to. It doesn't have the wow factor or opulence of places like the Theatre Royal or The London Palladium but it has so much going for it.

Space to move about, bars you can easily get to, toilets that are crowd free, large and comfy seats with good leg room and no pillars to block your view. I really don't think there is a bad seat in the house at the Gillian Lynne theatre. We got to sit in the stalls in row L - seats 41-46 and these were seriously amazing, we had a central view onto the stage and felt like royalty.

Free Photo Opportunities
We did love the fact there were a couple of free photo opportunities in the interval. You could have your pictures taken with the guitars from the show if you had a camera/ phone with you or you could use a photo-booth style area and then email yourself the images. We did the latter and to be honest after using the loo, there wasn't time to get to the guitars too, so it would have been good for these areas to be open after the show as well, but understandably they probably wanted people to go so they could close up.


You could also just use the backdrop for your own photos and outside there is a cool poster wall (shown in my image higher up), to pose against for photos.


School of Rock, the Musical
The musical is based on the 2004 film of the same name. I saw the film many years ago and enjoyed it but it's not one I have seen again and again, so I wasn't sure what to expect from the musical. A few friends had seen the musical and told me it was 'awesome' and 'out of this world' so I was hoping for a treat, and when I saw the additional music was penned by Andrew Lloyd Webber, I knew that was a very good sign.

I honestly can't tell you how impressed I was with the level of talent of the musicians. Yes the adults were amazing, but then you have the kids and you have to wonder how someone so young can play so very well at their age.

It is high energy from the word go and you get absorbed in to the plot of the film, and decide which characters you like best. The first half ran for one hour and twenty minutes and then we had an interval of about 20 minutes and the second half was about 50 minutes/ an hour (I can't recall exactly). However, not once was I bored and the show appealed to all of my family - near 15 year old boy and 11 year old twin girls, as well as my husband and I.

About fifteen minutes before the show closes, when the musicians are at the 'Battle of the Bands' the lead Dewey Finn, announces that now is the time to take some photos and share them on social media and we were all very excited that we could capture the energy of the show in both film and video.

Then before the show is out you are encouraged to get up clapping along and dancing away to the show. It really is a massive high to end the show.

It's been a superb 36 hours up in London with my family for my birthday. 🇬🇧💂🇬🇧 . We ate, we walked, we laughed, we relaxed, we watched @schoolofrockuk Musical and visited @visitparliament 🇬🇧💂🇬🇧 . We had the BEST time. I can't recommend School of Rock enough. Those kids are so talented. 🇬🇧💂🇬🇧 . Now we're on the train back home and I can't wait to write about the fun we've had. #review to follow
A post shared by Michelle Pannell (@michelletwinmum) on Aug 16, 2018 at 5:19am PDT 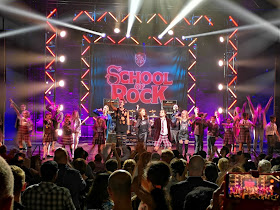 There is a bit of everything in the show making it really relate-able - themes of friendship, love, acceptance, personal growth and belief, not judging a book by its cover, and so much more. Then if you thought you'd only be hearing rock music during the show you'd be wrong as there are some very classically musical big numbers and even a bit of operatic singing. I truly loved the voice of Rosanna Hyland who played Miss Mullins, the school headteacher and it goes without saying that Craig Gallivan who played Dewey Finn was out of this world!

We all loved the School of Rock Musical and I'd happily see it again. The acting was excellent, the musical talents of the team extraordinary, the atmosphere electric and the staging seamless.

I also loved that when you shared images on social media, loads of the cast are really interactive and tweet you.  The hashtag they ask you to use is #Imintheband and then they tweet you back with #youreintheband. I thought that was a really nice touch.

If you want to find out more about the School of Rock musical, check out their website and you can book tickets there too. 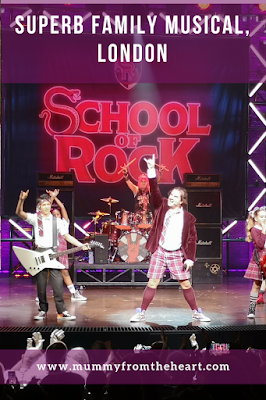 Disclosure: We received complimentary tickets for our family to see the show. I have not been instructed what to write and I remain honest.