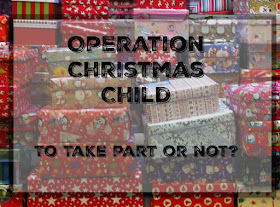 Christmas, it is a time for giving and for receiving but for me, much more than that it is a time of goodwill, for thinking of others, for being generous and for reaching out.

You'll see lots of blog posts at this time of year from people taking part in shoe box Christmas gift schemes (particularly Operation Christmas Child) and your children might come home from school, church or something like brownies with a leaflet asking you to help and make a shoebox of gifts for a child, family or elderly person in need.

What do you do with this leaflet? That request from your children? Because let's be honest most kids want to get involved, their heart is to do something kind.

Do you bin the leaflet and hope your kid will forget? Do you tell them 'No, we are not getting involved as that charity is making kids become Christians'? Do you quickly remember how low your bank balance is and decide that £10 would be better off spent on your own child? Or maybe you adopt that age-old opinion, that charity starts at home.

Let's be honest, it is completely up to you what you do. No-one has to do anything they do not want to and no-one has the right to judge you for your choices. You just have to be happy yourself with what you choose to do or as the case may be, don't do.


Let's explore some reasons you might not want to get involved -

1.  I can't afford it
If money is an issue for you and you can't afford to make a full shoebox, then why not suggest to school/ your child's group that they have a couple of class boxes and you could just donate one item? Or team up with a friend and make the gift together. It really doesn't have to be expensive, I can make a great shoebox for as little as £10, it just takes some planning and clever shopping.

2.  I don't want to send cheap rubbish
A few people have told me before they would not send a shoebox gift as they are filled with cheap plastic tat and it will be broken within minutes and then the recipient child will be upset. Let me assure you as someone who has visited very poor children in Belarus, Ethiopia and India that these children have so little that they are pleased with anything and everything. A skipping rope that cost us £1 is a complete luxury to them as is a bag of sweet treats. The best advice I can give is for you to give them what we might call 'old fashioned toys' - sports equipment, dolls, toy cars, dinosaurs, musical instruments and anything sturdy and versatile. They have no interest in fashion or outdoing their friend! 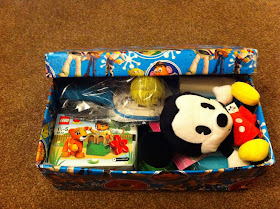 3.  It's not fair and the children will get jealous of each other
Truly this has not been my experience. The children I have seen receive shoeboxes and adults I've talked to who were shoebox recipients as children have been satisfied with whatever they received in their gift box. They do not appear to be like the children we are used to who shout 'it's not fair' at every opportunity. There is no grabbing and coveting another's gifts. They actually seem overjoyed that their friend has something fun and cool and hope it might be shared with them for playtime.

I chatted to an adult recipient who told me she recalls the flavoured toothpaste that came in her box and how special it made her feel. I was flabbergasted, I hate putting a toothbrush and paste in the box as I (in my Western mindset) felt they were boring.

4.  It's a hassle that I just don't need
As I said before, your choice but from experience, I know that when I do something selfless and for another who has a lot less than me I feel really good about what I have done. I tend to walk around with a big smile for at least that day. We all like the idea of random acts of kindness or paying it forward and these are the kind of concepts we are teaching our children by getting them involved with making a shoebox gift.

5.  What those children need is food, shelter and clean water, not toys
You are right, in part. The shoe box recipients generally do need more food, clean water, better shelter and probably clothes too, those practicalities are an absolute necessity for them to be able to live. They also need other things to allow them to not only live but to thrive and to grow too. Believe it or not many of the items in these shoeboxes - teddies, hairbrush, jewellery or hat make the world of difference to a child living in poverty. They feel appreciated, loved, confident, worthwhile and inspired.

I have seen children change from thinking they are no-one to knowing someone they have never met is thinking of them, it is powerful beyond words. In 2013 I met and got to know Kymbat, a wonderful young woman from Kyrgyzstan and she told me about having received shoe boxes as a child and the difference they made to her. 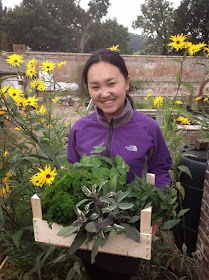 6.  It harms the local economy
I understand that some aid is ill-thought through and can negatively impact the local economy. I've seen firsthand the difference that aid can make when it is injected into a project that has been conceived and grown by the local community, they really are the best ones to come up with solutions to their problems.

But shoebox gifts harming the local economy - how? These are not things that the recipient families could have gone out and bought, they do not have the means to do so and it's not the case that a group of Westerners arrive and dish the boxes out in a manner that doesn't fit with the cultures and norms of the community. All boxes for Operation Christmas Child are distributed by local partner churches, charities and missions who are already working in that area and probably know many of the families already.

7. No one is there to help those kids the rest of the year
I've already said that the people giving out the boxes are those who ARE available to help in the local area the whole year through, they are based in the local area and have a desire to see people released from poverty and oppression. Samaritans Purse do not just run Operation Christmas Child they are also a massive and effective provider of humanitarian relief: they are on the ground in Liberia training up doctors and nurses to cope with the aftermath of the Ebola outbreak; following the most recent earthquake they have volunteers in Haiti fighting to keep cholera at bay; and there are people working in over 100 countries across the world to try and help it become a better place.

8.  Operation Christmas Child are forcing kids to convert to Christianity
You've heard that literature telling the child about what it means to follow Jesus is put in every box, right? Let me tell you on my life, it is lies! In the UK (and that is who I am targeting with this post, those in the UK) they NEVER put any literature in the boxes. The boxes are checked at a warehouse to ensure they meet customs requirements and to ensure the items in the boxes are suitable for the child, ie: they are new and unused with good use-by dates for sweets etc and then they are sealed with tape and the next person to open the box is the child.


When I travelled to Belarus with OCC to take part in some shoebox distributions we didn't give out any leaflets and the course was not running as it was not appropriate at that time due to the local political climate. And this is what happens, the local contacts make the decision if it is safe and appropriate to give out the literature and if it isn't then the kids still get a shoebox and a message of love.

I want to be totally honest with you, so I'll say that I think (and it is only think as I don't know for sure as I've not worked with them) that OCC in the US do put literature in the boxes that they give out but I still understand that the boxes are given without any criteria, any child of any faith can receive one if they have a need. That is the only basis of choosing recipients, that the child is living in poverty.

The gift is unconditional and before I travelled with OCC this was my greatest concern and if I had found that only certain children got boxes or that there were strings or terms attached I'd have never packed another box but here we are four years later and the kids and I have just made up six.

So after reading that, what do you think? Are the shoe boxes a bad idea?

Please I want to urge you before you decide not to get involved in something - stop and think. Maybe do some research so you can make up your own mind. Don't automatically believe the hype that one newspaper, organisation or blog is telling you, they may have their own agenda and really is Christianity so bad? So much of the charity in this world is done by Christians, without us the world would be in an even sadder state.

Talk to trusted friends, read widely and go with your gut. What is right for your family? It doesn't matter what the loudest parent at the school gate has to say. OK, so she hates Operation Christmas Child as it is run by an evangelical Christian charity and she feels all kids are being forced to convert to be Christians, all for the price of a shoebox. Is that what you think? You are a strong individual in charge of your own thoughts.

Stop and question things - can all this negativity about OCC be right? Samaritans Purse, that runs Operation Christmas Child are a charity that has been established since 1970 and are approved by the charities commission In the UK. When you look at the independent Charities Navigator site you see that Samaritans Purse has a four-star rating (the highest there is) and scores 97.5% for their financial performance and 100% for their transparency and accountability. Does that sound like a charity that is looking to fool you?

If you compare their performance to other well-known charities, like Save the Children, for example, you see that their scores are 87.46% for financial and 97% for transparency, so still good but not as good and Oxfam is only rated 3 stars with scores of 80.68% for financial and 97% for transparency but I bet you don't think twice about going into one of their shops or sending a virtual gift, like 'give a goat'.

I'm sure you've read enough by now and you've got my gist. I want you to make up your own mind and if you decide not to support OCC then no problem. It is your choice. There are so many great charities you can support if you want to do some Christmas giving but if you do decide you might like to give a shoebox with Operation Christmas Child then the following posts might interest you and you have until 18th November this year to drop your box off locally or you can use the online shoebox world at any time of the year.

The best Christmas present ever for under £10

Travelling to Belarus with OCC

Disclosure: I have nothing to gain from posting this. I do not work for Samaritans Purse, they've not paid me, in fact, they have no idea I am writing this. 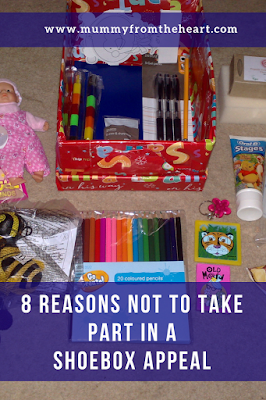