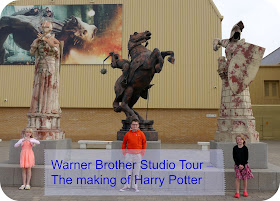 Before our holiday we decided to cram in three or four Harry Potter movies, the reason being that the girls had never seen one and we were off for the Warner Bros Studio Tour – The making of Harry Potter in Watford, Hertfordshire at the end of our holiday. My husband and I have watched all the movies and JJ has seen all the older ones and we are all fans and had enjoyed them. Not fans in the sense that we know every fact or have watched the movies fifteen times a piece but just fans as in we can appreciate really good story telling and cinema.

I had wondered if you would need to be a mega fan to get the most out of the studio tour and to really enjoy it but I can happily say that it is a great day out for everyone, even my seven year old twin girls had a good time. Although truth be told it is probably best for older children and adults who enjoy talking to the guides and reading about all the sets, props, costumes and creatures that you can see.

This is one of those reviews where I don't really want to write too much or show you many pictures as I feel I'll be giving away some of the secrets and amazement of the Harry Potter films but actually how do you do a review without sharing the information? So what I'd say is if you are a Harry Potter fan and believe you will enjoy the studio tour don't read past the generic information below, just go along and have a wonderful day, I'm sure you won't be disappointed. 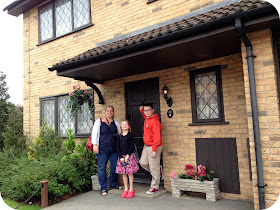 A bit about the attraction
Warner Bros Studio Tour – The making of Harry Potter is a permanent feature at the Leavesden studios (about 20 iles north-west of London), it opened in 2012 and had been a raging success since. You need to book in advance for your tickets and there are timed entry slots to ensure that it never feels too busy. Be aware that you cannot just turn up on the day and try to gain access. There is a large car park if you want to drive and the venue is easily accessible from the M1 and M25. Do make sure you have your email confirmation with you to show the parking attendant and then collect your tickets from the collection desk once parked, for us on a school holiday Saturday we had no queue which was great. You can also get a train to Watford Junction and there is a shuttle bus every 20 minutes or so during the day and this will cost you £2 return per traveller.

Warner Bros estimate that people will spend about 2.5 - 3 hours on the tour but the great thing is you can spend as long as you like there. Our slot was 10.30am and I think it was good to have an early slot as you don't feel any rush to move about, we left at 3pm and this was plenty of time but to be honest if we had not had the girls with us we probably would have stayed longer. Opening times vary depending on the time of the year so check online.

Eating and drinking
You are advised to arrive 20 minutes before your allocated time slot but you can arrive earlier as there is a nice Studio Cafe which serves breakfast until 11am and then main meals with a variety of options such as baguettes, salads, jacket potatoes, cakes and children's lunch boxes. There is also a Starbucks in the foyer if you want to grab a quick coffee.

No food or drink is allowed in the tour rooms themselves as they need to preserve the items displayed. Half way round the tour you enter the backlot, which is an outside area with some covered seating and here you can buy light snacks - sandwiches, coffees, cakes etc. You can also buy an authentic Butterbeer which is a frothy drink sort of like a butterscotch cream soda. We saw lots of people having picnics here too and I see there is an outside picnic area near the car park too if you want to eat before or after your tour. I'd say to plan your tour around eating times as you cannot just stop and eat or slip out and have a bite and then go back on yourself as the tour is just one way.

Shopping
The shop can be accessed before or after the tour and it is fantastic. If you are a Harry Potter fan you will be in heaven but be aware it is very expensive, a wand will set you back £25 and even the most basic of kids t-shirts were about £18. You can get confectionery gifts for less if you want just a little reminder but remember to set the kids (and yourself) a budget so you do not over spend.

As well as the shop there is the opportunity to buy photos or video of yourself either riding a broomstick or flying in the Weasleys blue car. We had wonderful fun in the green screen area making our videos but boy are they expensive. One photo sets you back £12 but the prices do get better with the more you buy. We bought 4 photos and a USB video for £40. 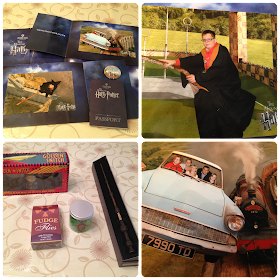 The tour itself
The tour is split into a number of different areas and flows really well. When you arrive you join a queue for entry and are only in this for about 10/15 minutes but the time goes quickly as there are lots of things to look at like the cupboard under the stairs where Harry lived in the first film or the flying car used in the second.

We were then ushered through to a black room with moving posters and it is interesting to see how many languages the film has been re-made into. You see a short video of how the J K Rowling books came to be made into films and I  felt quite patriotic standing there and remembering that both the books and the films are British.

Within a short time you move through to a very comfy cinema with a huge screen and watch a film about the making of the Harry Potter movies. All eight movies were filmed at these very studios and you start to get excited as you see the fun that Daniel Radcliffe, Emma Watson and Ruperb Grint had making the films along with the thousands of other dedicated professionals. 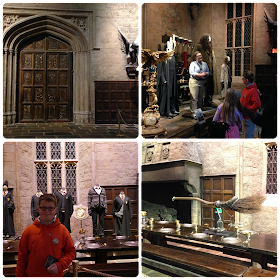 The screen lifts and you see the doors that you know lead to the Great Hall and then the guide gets anyone whose birthday it is to open the doors and your tour group go through to enjoy the splendour of the great hall. The detailing is amazing and there are so many fabulous costumes that you will instantly recognise. The floor is real flagstone and it all has a very grand feeling about it. The guide gives lots of information at this stage and the staff here really do know their stuff, we spoke to loads of them and you can't seem to catch them out with anything, they know all the answers.

Once you go through to the big room you are on your own (unless you have rented a digital guide for £5 or a real guide for quite a lot more) and you can go at our own pace. I'm not going to say a lot about this area as I really do think you should explore for yourself but it is fabulous. There are full sets, props, costumes, wigs, green screen technology and just so much to look at and be photographed with. It is a visual delight. Oh and thankfully (when you have kids with you) there are toilets and they are clean and well stocked. 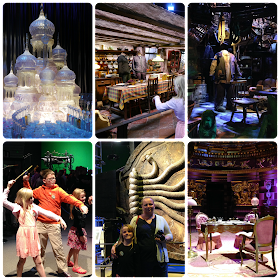 After the big room you move outside to the backlot and as I've mentioned before you can have a snack or eat a picnic here. Again there are loads of photo opportunities and some really big sets for you to see and enjoy. My kids particularly liked the remote control chess pieces and chatted to the guide there for an age, personally I enjoyed a Starbucks!

Once you have had enough of the backlot it is time to go back inside (past more toilets) and first up you are in the creatures room, where there are some wonderful large screen presentations about all the artificial intelligence used to make all the the creatures you see in the films.

You can then spend time on Diagon Alley but sadly you can not go inside any of the shops but again the guides are great and will chat away to you about anything and everything Harry Potter.

After this you get to see many of the original drawings, art work and scale models for the creatures, sets, buildings etc from the films and again you are amazed at the amount of work that goes into this kind of film.

The final room is rather spectacular as it is a very large model of Hogwarts and you get to see it by both day and night. The interactive TVs around the room (there are plenty of them) are great as you can learn all sorts of interesting facts. To leave the tour you spiral around Hogwarts and can see it from all angels.

The final part of the tour is a wand room where everyone ever involved with any of the films has their own personal wand box and the kids had fun trying to spot the famous stars.

Special Features -
There are a number of special features that run during the year, whilst we visited it was the #bludgers andbroomsticks feature which had lots of great exhibits and information all about the game of Quidditch. 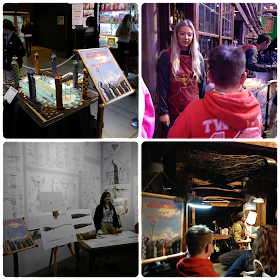 Anything for the kids?
When you collect your tickets you can ask for a free passport and this is a nice quality passport that the kids can stamp as they go round the tour. The stamps emboss the page and are really great, it makes a super keepsake. They can also try to spot the golden snitches around the tour too and on the one hand this was great but on another they sort of lost the enthusiasm to look at the sets and props as they were focused on finding the snitches!

Would we recommend?
Yes for sure. It was a great day out together, I suspect that an older child or adult would enjoy it even if they had never seen a Harry Potter movie before but of course the best enjoyment will come to those who know the movies. The one thing I would say is that it is expensive, if we had paid for our family of 5 it would have cost us £116.50, so you might need to save this for a special occasion or get saving but do make sure you go, it is a great day out.


Disclosure: We received free entry to the tour for the purpose of writing this review. I have not been instructed what to write and I remain honest.