Last week we took a 4 night, 5 day break at Sand Le Mere Holiday Village in Tunstall, East Yorkshire. This was quite a drive for us and took about 5 hours from Hertfordshire; at about 180 miles this is probably the longest car journey we have braved with the kids and I have to say it was nowhere near as bad as I had feared.  The journey to Hull was simple and the road signs good but the part from Hull to the holiday village was much more difficult, the signage is not great and the roads become country lanes. We reached Sand Le Mere about 3pm on the Monday and were greeted by a lovely receptionist in the bright and spacious newly built complex.

Within minutes we were heading off to find our luxury lodge, dh took the car round and the kids and I walked the 2 minutes it took to get there. I was pleased to find we had an allocated parking space right outside our lodge and that the lodges were attractively arranged with a good amount of space between them. 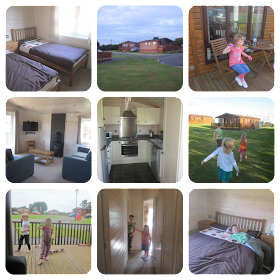 OK massive tick within the first few hours of arriving.  We all loved the lodge and one of the kids even commented that perhaps we could move there instead of our house! I can honestly say there was nothing in the 5 days that we were there that did not meet with our expectations in regards to the lodge.  On day 4 we did find lots of tiny black flies on the insides of the doors and windows and as urban folk we were a bit phased but after a quick conversation with reception they confirmed they were just fireflies and that they come up when the fields are harvest.  We went off into Hull for the afternoon and the receptionist offered to send someone to look whilst we were out. Upon returning, our lodge was completely clear of them and a tin of Raid had been left for us as well. I call that great customer service.


One of the main features of the holiday village that we were there to review was the new £4 million entertainment complex that opened in June this year. I spent ages filming various parts of it like an undercover spy and received many funny looks from people and then when I checked back on the Sand Le Mere website the next time I saw they had done a promotional video and I can honestly say it depicts the truth. So why spend hours editing when they have done the job for me - result!  Go on, take a look at what is on offer and I'll talk you through what we found in each of the areas -

Swimming pool and splash zone - 10/10.  I honesty can not criticise anything about this area.  The pool is a good size, there is adult only swim first thing in the morning and then it is open for the family.  The slide is superb and has a fun water feature on the top which every so often soaks everyone.  There is also a flat splash area.  The girls loved the bubble spa at the side of the main pool and I loved the bouncy, cushioned steps and pool floor - so safe, like nothing I have ever seen before. We did not try out the sauna or steam room but they were there for adults to use. 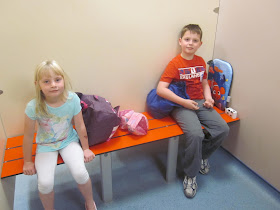 The changing rooms are well proportioned with 6 generous family change cubicles, 2 disabled change areas and loads of single changing and lockers. I found the toilets and showers to be clean at all times we used the pool, and that was every day!

Each day there is also a paid activity available for those who wish to do just a little more, like water walkers, water polo or aqua jets.

Soft Play - 10/10.  Whilst this was not the biggest play area, it was perfectly adequate.  All my kids enjoyed it, even the 8 year old, which is unusual.  Apparently the slide is awesome, of course I did not try it out myself.  Again the area was very clean and bright and looked great.  I loved that it was open all hours and that made life really easy when the kids wanted to be busy at unsocial hours. There was also a smaller baby/ toddler area situated next door in the coffee bar.  I can imagine I would really have appreciated this when my kids were younger. 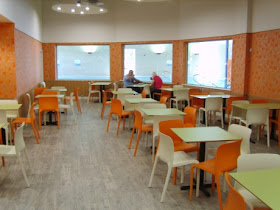 Soho Coffee Bar - 6/10. The prices in the coffee bar were really reasonable and I always enjoyed my drinks there, though dh commented that the hot chocolate could be a bit unpredictable.  It was nice to be able to sit and watch the Olympics on the flat screen while the kids were in the soft play and I saw loads of Mums watching their kids in the pool through the glazed viewing area.

What I would say is that the coffee bar needs more stock, there was nothing available for the kids, like juice or fruit shoots and Sand Le Mere are missing a trick here as I just went into the shop and bought a 29p juice carton (29p, yes really!).  The bar looked closed with just a couple of baguettes in the fridge and until the day we were leaving there was no food menu available, you had to second guess you could get a toasted sandwich there.

Arcade Area - 8/10. Nothing wrong with this area at all, I just perhaps would like to have seen a few more 2p machines.  The fun of this sort of area for me is the kids having a go but not at the expense of my purse. There was a good amount of games that the youngsters enjoy like guitar hero, dance platform, shooting games, push a penny, as well as traditional fruit machines. 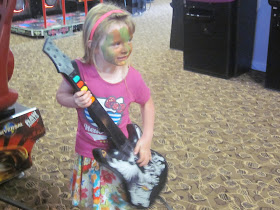 Shop - 5/10.  I think the shop needs to be worked on in truth, yes it had a fair mix of items available but many were not priced and that put me off.  Quite often the drinks fridge was verging on empty and while the staff were really pleasant they were quite happy to read a magazine rather than fill up the shelves. It looked the best it had done all week on the day we left, there was a new staff member in there and a delivery had obviously arrived as there was a full selection of sweets and fresh produce. Something like an in-store bakery would make a massive difference.

Gym - We did not use the gym as that is not really my idea of a relaxing holiday but peeking through the window it looked well equipped for a small complex and was perfectly clean.

Kids Club in the Compass Show Bar - 8/10. There were 5 members of the entertainment team and with regards to kids activities I just cannot fault them.  The first morning kids club (11 - 12.30pm) that we attended was Spy Club and it was just fantastic.  The kids were all face painted, they learnt to work together as a team and they had bags of fun.  We did attend others and whilst they were good they did not compare to the first one.  So the reason for the 8 is that the quality depended on the team members working, but even an 8 is great, surely? 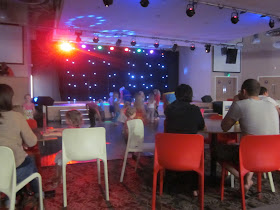 We also went to the kids entertainment each evening from 6.30 - 8.30pm and the kids all enjoyed dancing, playing with hoops, joining in with games and competitions and trying their hand at being picked to win a Sand Le Mere medal - highly coveted!  However, both dh and JJ managed to bag one each, much to the girls dismay.

We did not stay on for the adult entertainment in the evening as our kids are young but the bar was buzzing with people and there appeared to be a good spread of entertainment available.  The bar served a wide selection of drinks and the prices were reasonable, especially to a Southerner.

Meridian Bar and Restaurant - 5/10. The actual bar itself looks great and has a super outside seating area with large wooden play frame and swings etc.  There is also a green for ball games and a mini golf area, which pleased JJ immensely as he prides himself on his crazy golf skills.

One evening, myself and two of the kids tried out the restaurant for dinner and it was OK, it filled a hole but to be honest that is about all I could say. I spent just under £20 on 1 adult and 2 kids with 3 non-alcoholic drinks. We did all eat our meals, so it was not terrible but just average 'no skilled chef' pub food is how I would describe it.  I assume much of it comes in frozen and is then microwaved.


It was a bit of an issue to me as well that the wi-fi had gone down which meant I could not pay by my card.  I was expected to take cash out to pay for the meal, but you have to pay a charge to use the cash machine, so that did not meet with my satisfaction.

Reception - 7/10. Each of the staff I encountered on reception were very nice and willing to help but I would say that check-in took an awful long time and by the time I had finished there was a queue out the door.  There is a strange system with deposits for club passes, which had the receptionist back and forwards to the shop to get change.

On the first day I tried to use the tin opener and it did not work, I reported this to reception the next morning and within 2 hours they had bought us a brand new tin opener to the lodge.  So add this to the fly incident I reported and I would say I was 100% happy with the fault resolution procedures.

All in all, we were very happy with our stay at Sand Le Mere, it was just the relaxing time we needed for a few days.  I can't honestly say I would come again but that is down to the travel and it just being too far for us.  That did not seem to be a problem for many people though as there seemed to be tons of locals with caravans they use in the summer. The winner of nearly every kids activity seemed to come from Hull!


What pointers would I gave to Sand Le Mere to make their park even more fantastic?
All that is left to say is thank you Sand Le Mere for a really nice holiday.  We wish you all the best with your new complex, it deserves to be a real success for you.  Mich and family

A couple of other Mummy bloggers have also reviewed Sand Le Mere before me, take a look at Me and My Shadow and This Mummy Loves.

Disclosure:  We were provided with a 4 night break free of charge for the purposes of this review.  I have not been instructed what to write and I remain honest.
at 23:53
Share
‹
›
Home
View web version