Tips for Remaining Confident as a Teenager with Psoriasis 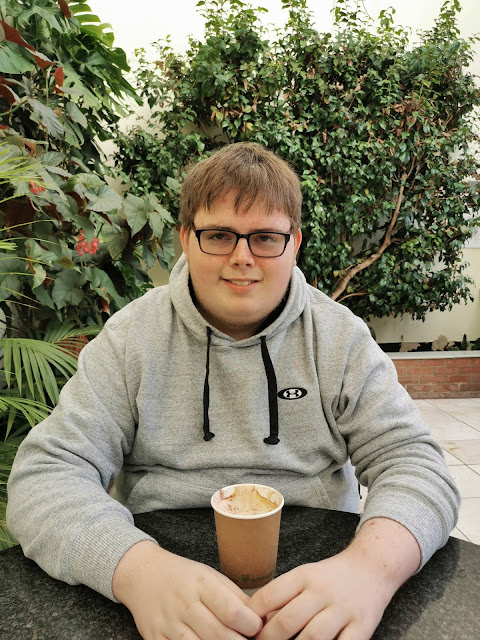 I'm really proud of my 17-year-old son, not only because he is super smart and already has his career with GCHQ mapped out in his mind, but because he is living with a long-term chronic skin condition and he does it with such good humour.  You'd be forgiven for looking at that photo above and thinking he is just a pretty normal teenage lad, perhaps a bit geeky or a nerd, but there doesn't look as if there is anything out of the usual, does there?
However, look a bit deeper and you'd see red or scaly white patches covering most his body. Why? Because he has plaque psoriasis.

Until JJ started to develop psoriasis three years ago it wasn't something I knew much about. I had no idea that it is estimated around 2 - 3% of the UK population are suffering with it (according to the UK Psoriasis Association), and it's only in the last year that I've seen just how bad it can get, both on JJ and by joining some online support groups.
Psoriasis is a particularly difficult skin condition as there is no cure for it, and it presents differently on each person. I'm also learning that what works to helps relieve it at one point may stop working, and there is a massive range of treatments to choose from. It can be quite overwhelming if I am entirely honest.

JJ's psoriasis started off on his back, behind his ears and a patch above his left eye, then over time it has spread and worsened. Whenever I read about psoriasis there is always a description of it flaring up and being worse for a while and then subsiding again. Sadly, this hasn't been the case for JJ, the psoriasis on his body has been progressively getting worse over the last year or so. The plaques on his face do seem to go down with topical steroid creams but we are really trying to limit the use of those.
You can see the from the zoomed-in photos below the reality of how psoriasis can look when you are up close. JJ's daily reality is a scalp that itches and flakes excessively leaving him with 'dandruff' shoulders, red or scaly white patches on his face and his body, constant moisturising to help take away the tightness, itchiness or even pain of his skin, a floor that needs hoovering almost as soon as you've just done it and bedclothes that end up covered in emollient.
He doesn't have the luxury of most teenage boys, that of choosing if he has a skincare regime, without looking after his skin he'd be uncomfortable all the time. 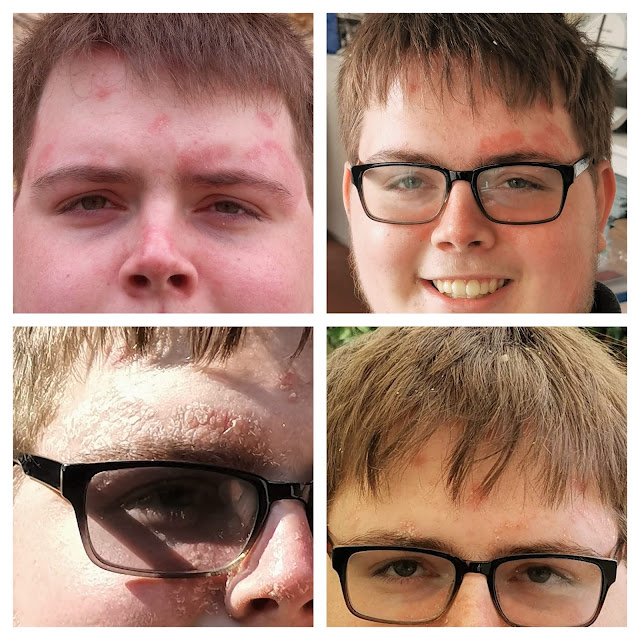 What I love about JJ is that he just gets on with life. He does not allow his psoriasis to define him, it is just a part of him. When people stare at him (and yes it does happen), he ignores it and smiles back. It genuinely does not seem to outwardly phase him, and when I chat to him about how he feels, he is quite nonchalant about it. Realising that he is doing what he can and if others have an issue with it, he says it is just that - their issue! 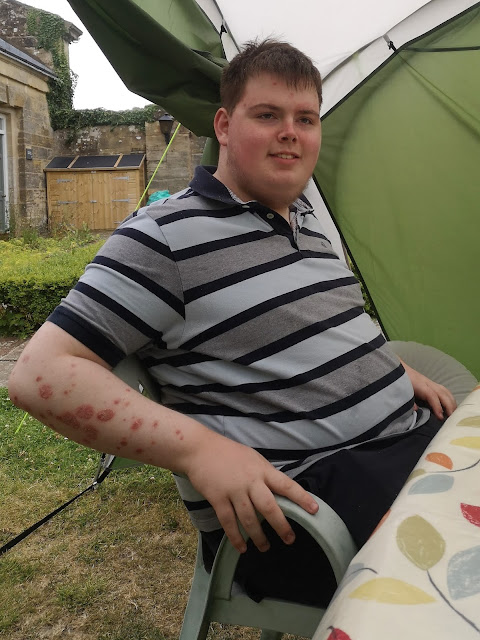 I asked him how he remains confident as a teenager with psoriasis, much of it very visible if he wears shorts of a short-sleeved top and he said that he feels secure in who he is. He is so much more than a skin condition. He is an academic, skilled gamer, with excellent general knowledge who loves to have a laugh and learn something new.

Advice for Teens from a Teen

So here are JJ's top tips for remaining confident as a teenager who suffers with psoriasis or to be honest, any skin condition. First, he says it is important to discover who you are and once you know your strengths and the things that make you unique, you need to be proud of your identity. Stop those bad words you say to yourself in your head. Picture yourself as a child with your skin condition and talk to yourself as you might do that vulnerable child. In other words, offer yourself love and acceptance, as your skin does not change you or make you any less worthwhile. People love you and you must learn to love yourself.
That leads on to his second tip, which is to accept that it is unfair and learn to live with your skin. Of course, you'd wave a magic wand if you could and have perfect, blemish-free skin but you haven't and all the time you are resentful and stressed, the chances are your skin will flare worse. It is widely accepted that stress plays a part in psoriasis flare-ups and as such if you always feel unhappy and stressed, your skin has little chance of fully repairing.
He says it is important to try to normalise your skin condition, it isn't the end of the world to have some flakes of skin on your shoulders, but if it bothers you make sure you brush them off before entering a building. And do wear short-sleeve tops or clothes that may show off areas where you have psoriasis as you have nothing to be ashamed of. You just have an overactive immune response, that is all. You are still beautiful, unique and worthy.

To regularly moisturise would be my advice as a mother of a teen with psoriasis; you really can't moisturise enough. JJ and I decided about six weeks ago that he would stop the use of all topical steroids as we were concerned for his long-term health and realised they had stopped working so well. So over the last few weeks, we have been trying out many different creams and lotions to see if we could find something that offered him relief, without it being medicated.
I'll be honest when an email about Epaderm arrived in my inbox it wasn't a brand I was familiar with, so I requested some samples and headed to my go-to FB support group for Psoriasis sufferers. I asked about Epaderm and if anyone was familiar with it/ using it and I was blown away by the amazing responses. People were telling me it was the only thing that offered them relief, that they used it in the bath, it was very soothing, a lifesaver, especially on their scalp and someone even posted pictures of her hand at the start on the week and at the end with a massive difference.
Happy to hear all these great recommendations, we set about using it and it is really good. I've found the cream good for JJ's face as it is light and doesn't feel oily, but the ointment is my favourite as it has a really unusual texture and a small bit seems to go a long way. JJ says he feels the relief after it is applied and his skin feels less tight after using it for a couple of weeks.  It also doesn't seem to make as much mess of bedclothes as other brands do.
We're feeling really optimistic for using Epaderm long-term and seeing how it helps JJ. 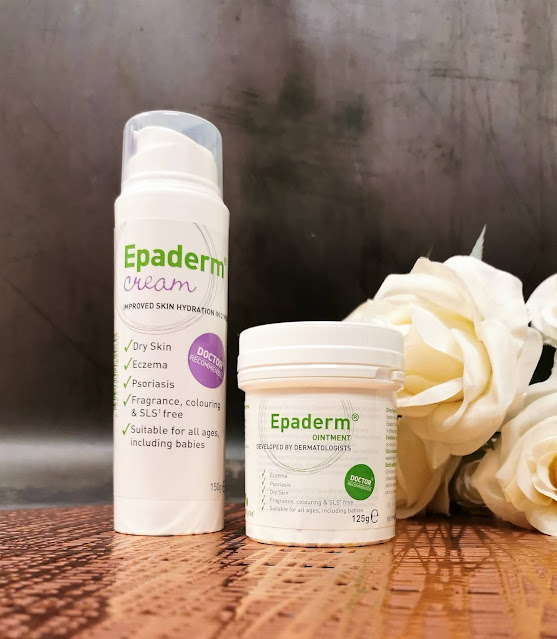 This post is my entry into the #BlogOnEpaderm blogger ambassador competition. Please pick us Epaderm, JJ deserves a treat and I am excited to be able to share his journey and encourage other people with dry skin conditions! We can't promise you glamorous and glossy lifestyle pictures but we can offer you real experience from a teenager living with chronic psoriasis and we'll be sharing from the heart - honestly and with kindness. 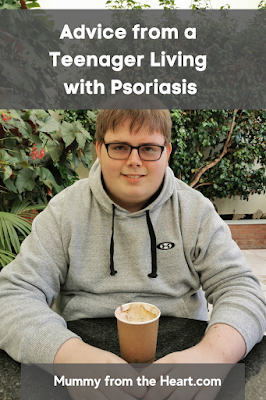