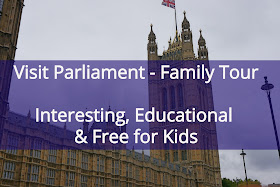 Last September as part of the BritMums Live conference I went over to the Palace of Westminster, or UK Parliament as you may know it and experienced what a family tour is like. We had Richard for a guide and he was awesome. I could just imagine my kids loving him; wanting to chat and asking all sorts of questions.

With this in mind I booked for our whole family to attend one of the family tours this summer. I knew this was a bit of a risky move, as the tours are aimed at children aged 7 - 12 years and my son is nearly 15.  He's also the kind of kid who loves information and thus is pretty knowledgeable about what goes on in our UK parliamentary system. I was therefore keen to see if the family tour could engage him.

The tour is free for children aged 15 and under and costs £18 per adult, or £16 for concessions. There has to be at least one adult with a child, and groups of adults without children, cannot attend the family tour.  There are all sorts of tours available and you'll be able to find something to suit you, but this particular one is perfect for children of Key stage 2 age.

Arrival and Starting the Tour
The tour lasts for around 90 minutes and ours was due to start at 10.40am. You're asked to be at the Palace of Westminster at least 20 minutes before-hand as you need to check-in and go through security, which I was very pleased to see is tight. I was therefore a bit annoyed that we actually started our tour at 10.50am as we were waiting for people to arrive.

The meeting point is in the very large Westminster Hall, which is the oldest part of Parliament at nearly 1000 years old. Once everyone was gathered, our tour guide, Lyndon (but we only learnt his name at the very end of our tour), explained that we needed to stay together and that we would again see the first rooms we walk through at the end, so please don't stop. He then set off up the steps towards St Stephens Hall and into parliament. 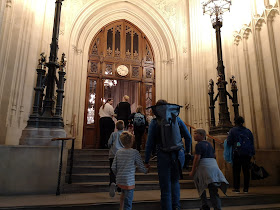 I think Lyndon forgot that not everyone following him was 10 years old and had seen all the amazing rooms before, as his speed was really far too fast. Then when some of us arrived with him at his first stop in The Princes Chamber, he jokingly chided us for being 'slow coaches'. There were at least a couple of people on our tour in their 70's or maybe even 80's. I don't know if this is his normal speed or if he went fast as we started late, but whichever, it is something for him to consider in the future as I didn't feel rushed at all on the tour I had previously done with Richard.

Engaging and Informative
Once we were all in the Princes Chamber, the children were encouraged to sit on the floor with the adults standing behind. There were 22 of us on the tour, as a few people had not turned up. If standing is an issue for you it is worth noting that most of the tour is standing as you're not allowed to use many of the seats.

Lyndon had a really good way with the kids, not being too patronising, but repeating things if he needed to and asking lots of questions that the children were able to answer. They were all enthralled with his commentary and explanation of the historical context of how parliament operates in the way it does today. We spent about 15 minutes in this area and it was very interesting.

We then moved through to the House of Lords and learnt who the Lords are, how they become a Lord, that there is a move to maybe change the name to the House of Peers and that they need TV screens to remind them what to talk about and to time them, so they don't get too side-tracked!

In the Members' Lobby Lyndon entertained us all with his impressions of Winston Churchill, and he talked about many of the prime ministers whose statues are there, giving everyone a bit of valuable history on significant figures in British politics such as Margaret Thatcher, Clement Attlee and David Lloyd George.

We also took in the Central Lobby and Aye corridor (to the side of the commons) where we could finally grab a seat and rest for a few minutes whilst we learnt about the Handsard books, and every word that is spoken in a debate being recorded for the public record. My husband then informed me this is why some MP's witter on a lot to try and bury their real message in a load of waffle!

A Chance to Ask all the Questions you Want
Once in the House of Commons the kids really came into their own with loads of questions for Lyndon and he had loads of great tit-bits of information for them too. They all seemed to like the sound of parliamentary ping-pong and my son enjoyed being able to answer some of the more tricky questions. It was good to watch him and my husband chat away about politics and their opinions on our current party in power.

Our final stop was in St Stephens Hall and again because of the speed of walking, some people arrived in there a good few minutes before others and I'd literally got my phone out to take my first picture when Lyndon was saying 'has everyone got the photos they need so we can end the tour'. I wasn't going to be rushed though, so many of us continued to look around and enjoy getting our photos before we headed out to the top of the steps in Westminster Hall. There we saw an amazing stained glass window and also the super art installation 'New Dawn', which celebrates the 100th anniversary of the Representation of the People Act 1918, where women gained the right to vote. 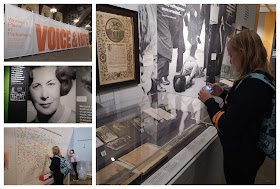 Voice & Vote Exhibition
Lyndon talked a little about how women had gained the vote and this was a good lead in for us to be able to look around the temporary 'Voice & Vote: Women's place in Parliament' exhibition that is in the Westminster Hall at the moment. This exhibition is there until 6th October 2018 and was interesting to walk around. There is a useful leaflet giving all the explanatory information for adults and a larger version with things like a word-search, questions and prompts for drawing for the kids too.

It only took us about 20 minutes but the kids all learnt something new and it was particularly useful for the girls to learn a little more about what the women before us had to go through to gain the right for us to vote, and therefore how important it is that we use that vote when old enough to do so.

Shopping, Eating and Amenities
The gift shop is really nice and of course there are some very expensive items but my girls were really pleased to find 20p badges and 75p pencils. I also treated myself to a House of Commons Christmas tree ornament to go with my collection. 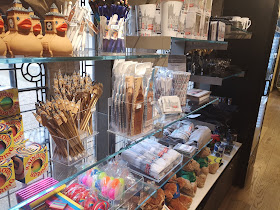 We used the toilets and they were clean and well stocked and we would have had a cup of tea but the Jubilee Cafe was closed for maintenance. I was pleased to see they had made provision with Westminster Abbey and the Supreme Court for Parliament visitors to be able to access special offers on food and drink in their cafes.

Conclusion
Our tour time finished with Lyndon asking if anyone had any other questions and he told us he was available in the Westminster Hall for the rest of the day if we thought of anything else later. We finished at about 12.10pm and this meant our tour took 80 minutes.

I asked the kids how they felt about the tour and the girls (aged 11 years) really enjoyed it and felt it was exactly the right level for them. they learnt some new information and it wasn't boring. Miss E moaned that one family kept asking for information to be repeated but this wasn't Lyndon's fault.

JJ felt that it was too basic for him, which is what I suspected he might say. He plans to go back and do the audio tour, where you can access quite deep and specific information and it can take up to two and a half hours.

My husband and I both thought the tour was really good and our only grumble was the late start and fast pace at times.  Oh and Lyndon needs to smarten up a little too, his trousers and shirt were unbelievably creased up from the wash. In comparison to all the other staff we saw he looked very unkempt and out of character for the establishment we were in.

In all, I give the family tour an 8/10 and we would definitely recommend it for families with children aged between 7 - 12, or older if they just want a light introduction.

Take a look on the Parliament website if you want to read more information on the Palace of Westminster, and they have loads of short video clips too, it is a really great resource. 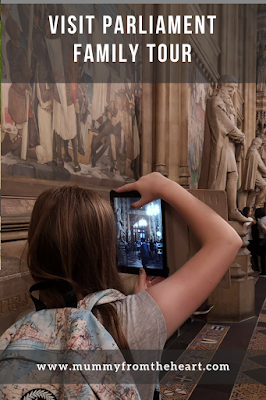 Disclosure: We received entry to our family tour free of charge for the purpose of this review. I have not been instructed what to write and I remain honest.