5 Reasons we Loved our Stay at Shorefield - Oakdene Forest Park, 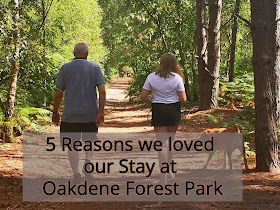 We were away on holiday last week and what an amazing time we had. It was the week when it was 28 or 30 degrees heat every day and I know we are supposed to be grateful for the hot weather but come on, have you ever stayed in a caravan in that kind of heat?

Luckily for us it was a fabulous caravan and that made the world of difference. We were staying in Dorset on the edge of the Hurn and Avon forest at a Shorefield holidays park called Oakdene Forest Park. My parents had stayed there when I was at Uni in the area over twenty years ago but they said it is unrecognisable from the park of those days.

Every year for the first week of the school summer holiday the kids and I go away with my parents, brother and their dog. Normally we stay in a house in Poole but we were all gutted to find out late last year that the landlord we rent from, had sold the property and thus we weren't at all sure what to do as houses for 7 people and a dog can be so expensive. As I browsed the internet in early January I came across some great deals for Shorefield parks and because of their January sale I managed to secure a really decent price for the two caravans. I paid £374.25 for each caravan plus £28.00 for the dog.

I'd booked for a Monday to Friday short break and we all agreed that we needed longer, so next time it will be a full week for us. Officially you can't access your caravan until 4pm on the day or arrival and then have to be out of it by 10am, so that only gives three full days which didn't feel long enough. I had called in advance and asked about early arrival and whilst there was no guarantees, I'd say it is worth doing this as both of our caravans were available for us at 2pm. This meant we were unpacked and in the pool by 3pm!

1.   It's a Small Park and it Feels Safe
When the children were younger we took a few caravan holidays and we stayed on some massive sites where it takes an age to get from one place to the next but I was very pleased to find that it wasn't like that at Oakdene Forest Park. Our caravans were really close to the centre where you find the shop, bar, restaurant, play park, evening entertainment, arcade and both indoor and outdoor pools.

Cars seemed to be very aware of the speed limits, there were well marked-out paths, it was lit at nighttime and you saw the same staff again and again. It was nice with tweens and a teen to be able to let them go off on their own and just check in at the agreed times as you always knew where they'd be. 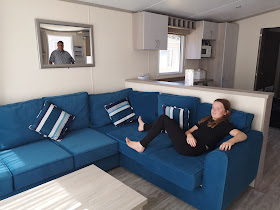 2.   Spacious and Stylish Caravans
I had booked for two basic Statement model caravans but we were very lucky that Shorefield upgraded us to the next level of Sensation caravans and they really are delightful. We had two caravans right next door to each other and you can park your car to the side. You can see our caravans below and from the outside they look like any other, but inside they are finished to a really good standard.

In truth, I had only booked this holiday as we needed something relatively cheap in the summer holidays. I had assumed my husband and I were over caravan holidays as you mostly find really tight bedrooms, with skinny beds and toilets you can hardly get in, and as large people that makes things a bit miserable. However, I needn't have worried as you'll see in the tour video below, the 2 bedroom Sensation caravan is really roomy.

3.   Comfy Beds Made on Arrival
This may seen like a silly reason but it makes all the difference to me. I really hate having to make loads of beds after arriving on holiday. All I want to do is unpack and relax and the beds already being made allowed me to do this. I didn't have to pay extra for the linen, I didn't have to pay extra for them to be made, it was just the standard offering and I love that.

Thankfully the bed was a really comfy king-size one too and it came with enough pillows as well. Whereas, normally I have to ask for extra pillows, as most places just provide one per person


4.   Super Location, set in the Forest
The park itself is picturesque as it is set into the forest and this means you have easy access to walking, cycling and riding routes. This made it totally perfect for bringing a dog, as there were loads of cool, shady walks to enjoy.

It is accessed via the A31, which is a major route through Dorset and means you can get to the park and out to other places really easily. The nearest small town is Ferndown and there you have all sorts of shops, pubs, restaurants, take-aways and a big Sainsburys, Tesco and Wilko's. Then Ringwood is a 10 minute drive, Bournemouth 25 minutes and Poole about 30 minutes. We found it easier to get in to Bournemouth from there, due to a lack of traffic and fast roads, than we have in previous years when we've stayed quite a bit closer.

I'd also recommend that you check out the two country parks that are just a few minutes drive away. We really love Moors Valley and Avon Heath country parks as they are packed with things to do, like nature trails, Go-ape, a mini railway and play parks. 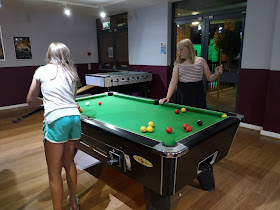 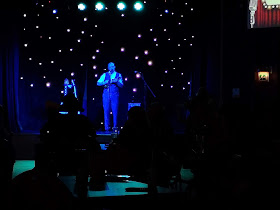 5.   All the Fun in One Place
As I mentioned all the entertainment and activities are contained in one area and this makes it really easy for families as we always knew were the kids would be. Multiple times a day there were going back and forward to one or other of the swimming pools, and the girls also loved the arcade area as that was where the tweens and teens hung out.

We headed over for the evening entertainment each day and of course you're not going to be getting a Broadway show but it is good old-fashioned fun. The kids particularly enjoyed the shows, cabarets and game shows that were on each night at 8.45pm, 9.30pm and 10.15pm. We also had great family time playing cards on the terrace, enjoying darts in the bar or pool in the late night venue. 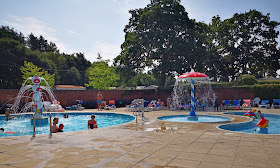 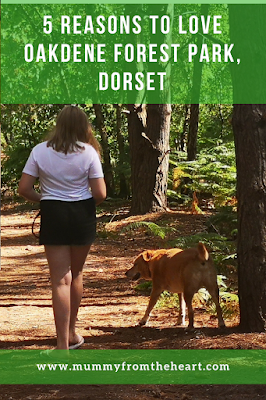 Disclosure:  We received a complimentary upgrade to both our caravans and in return I agreed to share about our stay. I was not instructed what to write and I remain honest.