I've lived in East Sussex for coming on five years now and The Lamb Inn at Hooe, or Pevensey Marsh as they call it is a pub that I've heard a lot about. When I've asked the question 'where is good to eat locally?' I've had the The Lamb Inn recommended quite a number of times before and as such I have no idea why I have never been there.

My husband has been there before for a leaving do and he said it was great too and it was with this in mind that I said a very quick yes when I was asked to come and try out the new menus and check out the pub after a recent refurbishment. The Lamb Inn is part of the Vintage Inns chain, which I knew from when we lived in Herts and used to frequent a couple of their pub restaurants there.

Our family (minus JJ as he was working) headed over to the Lamb Inn for Saturday lunch. Despite it being a very miserable and grey February day the building is still beautiful and you can tell parts of it date back to 1084, where it got a mention in the Doomsday book as a shepherds cottage. Then in 1520 the cottage became an inn and there was a charter decreed to allow shepherds to bring their sick lambs in to warm by the fire. My girls were enthralled to learn this little piece of history about where we were to eat our lunch.

Feeling Welcomed
As soon as we entered the building we were greeted by a lady serving behind the bar. It was good to get such prompt attention as she was already busy with a customer but it gave an indication that customer satisfaction is important to the staff at the lamb Inn. Within just a couple of minutes Sarah came over to greet us and show us to our table and she was our waitress for the whole meal and what a great one she was. I'd definitely employ her.

I think they have done a really great job refurbishing the pub, it looks clean, well appointed and is very comfortable. There is nothing stark or corporate about it, it has a very homely feel with each table being a little different and the chairs being mismatched but equally comfy. There are two distinct sections to the pub with the area to the left of the bar being much more light and open plan and the part we went in to was full of character with lower ceiling beams and plenty of cosy nooks. 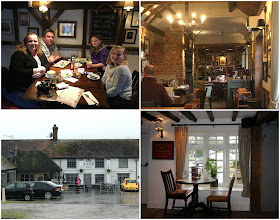 Menus on Offer
Sarah gave us a selection of menus to take a look at, we had the regular Saturday offering, a Vegan menu, specials for the day and also the children's menu for the girls.  Straight off our 10 year old twins started to moan that they wanted an adult meal and the kids meals would be too small for them and on they went. I quickly informed them it was a kids meal or nothing and the look of surprise on their faces when the food arrived and they were adult sized plates with a great amount of food on them.

The children's offering is £5 and you have a choice of a seven options, including those suitable for vegetarians. You then add a vegetable choice and a side to the main and there was a good selection of slightly different items including sweet potato fries and baby potatoes. On a Sunday there is also a child size roast and this is £6. They then get to add on a dessert for £1 too, which is great value.

I was very happy with the regular menu and impressed with the selection of food (there is a whooping 23 different mains to choose from). It felt just that little bit classier than the average pub chain menu and I was pleased to see classics like Hunters Chicken but with the twist of being served with roasted portobello mushrooms in a smoky tomato sauce.

Prices start from £5.25 for a small Kale & cauliflower couscous salad, or £7.75 for a small ham, egg and triple-cooked chips. There are also sandwiches for the day time and these start from £5.95 including skin-on fries. However, if you go for one of the more filling mains you'd be paying around £10 - £14. 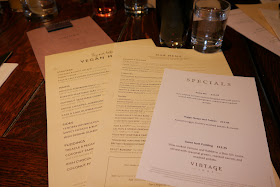 My husband isn't vegetarian currently but he has been in the past and does love vegetarian food cooked well, so he was super impressed with the Vegan menu as it is extensive and very wide in choice of ingredients. Main courses on this menu were around £10 each.

My husband and I said that next time we visit we'll be going on a week day so we can cash in on one of the excellent value set menus. At lunch you can have three courses for just £14.50 and there is a great choice of items or dinner is £18.50 for three courses and £14.50 if you just fancy two.

Our Food
We all decided to go for just a main and dessert, which I was very pleased about by the end of our meal as I was stuffed. I really don't think I could have managed a starter as well but I will give it a go another time as I love the sound of the Char-grilled lamb koftas and also the Duo of pate.

I decided to go for the Hunters Chicken from the main menu, which was £11.25 and I ordered a side of seasonal vegetables too for £2.50. I absolutely adored my meal and there wasn't even one thing I could pick fault with. It was supposed to come with BBQ sauce and I had to ask for this but that wasn't an issue as it was brought out promptly. 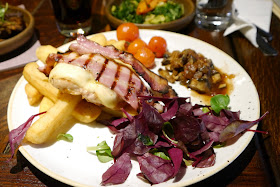 My husband went for the Spiced chickpea, aubergine & spinach burger from the Vegan menu, where it states it is served with a kale and cauliflower couscous salad but his actually came to the table with triple-cooked chips and when we checked it was also on the regular menu with chips as the side. Both sell for £9.95 and he was happy with his chips and thus didn't complain. He ordered a side of roasted squash and sweet potatoes (£2.50)  and these were probably a bit overcooked as they were black in colour but he said they tasted good. 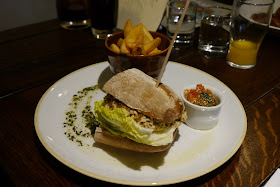 Miss E was pleased to see her favourite dish - sausages, mash and gravy was on the kids menu and she opted for peas to go alongside it. She absolutely loved the sausages and mash and her plate was clear of them but the little bowl of peas remained as she felt the were too hard. 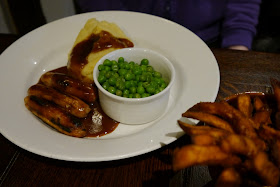 You can see in the picture we ordered the girls a portion of sweet potato fries to share and they were a great size for £3.00. Miss M went for the chicken breast with bacon (minus the BBQ sauce that normally comes with it) and she opted for triple-cooked chips and peas as well. She did consider baked beans but these weren't available, which wasn't an issue to us but I bet some kids might be disappointed.  The only thing Miss M did comment was that she'd have loved the option to have cooked vegetables with her dinner. 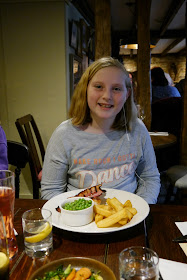 We all enjoyed a dessert too. My husband went for the Toffee & nut trio, which was treacle & pecan tart, crème caramel panna cotta and praline ice cream, all for £6.75. Miss E ended up nicking most of the panna cotta as it was really divine and dh was happy with the treacle tart and ice-cream.

The girls both went for the brownie with vanilla ice-cream and this is only £1.00 from the kids menu, so it is exceptional value, they also could have chosen 2 scoops of ice cream or an ice lolly.

I was pretty stuffed after my fabulous meal so I opted for the £4.95 mini dessert and drink. I enjoyed a cappuccino with half a brownie and it was really delicious as it came with an Irish Cream ice cream. The cappuccino was served after my dessert and I would have preferred it at the same time so that might be something for the waiting staff to ask next time. 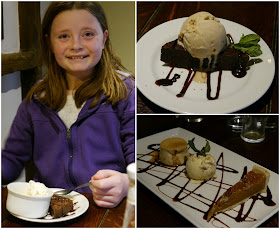 The Service
We had the same waitress from the greeting at the door right through to paying our bill and this was nice as it meant we could form a rapport with her. Sarah was an excellent server, not stuffy at all but still very respectful and professional. Everything I would have expected was offered, we were given time to choose, no pressure to order, suggestions were made, encouraging comments were received, she checked we had everything we needed, she asked if we wanted our water replenished and she checked in on us during our meal too.

I don't believe our service was this good as we were reviewing the restaurant though as Sarah was covering the whole seating area that we were in and we could see her chatting to and advising the other customers as well. I also overheard a close by table comment on what a great meal they had.

I mentioned earlier about the mix-up with the main course that my husband ordered. He ordered from the vegan menu and his burger should have come with a salad but Sarah put it through her system from the main menu where it came with chips. It wasn't a problem and thus we didn't mention it at the time but at the end of the meal we told Sarah about it, just so she'd know for the future and she was very thankful and said she would pass the information on.

Special Events and Offers
When we were in the pub we saw a number of adverts for Valentines Day and the special three course menu for £20.95. There is also a Saturday night steak dinner special offer, with three courses from £21 and Wednesday is pie night, with a choice of six great pies on offer. I think we'll have to try this as we saw a couple of pies go past on the way to another diners table and one of my girls was amazed 'they are enormous Mum!'.

I've signed up for the newsletter now so I hope I'll receive some good deals via that and I suspect a little something might come near my birthday as I had to enter that date.

A Fabulous Meal
In all we had a superb meal at the Lamb Inn and we will definitely be going back again as there really wasn't anything we could fault. The atmosphere, food, service and overall price was great. 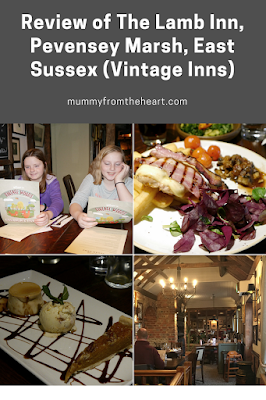 Disclosure: We received £50 off the cost of our bill in exchange for this honest review. I have not been instructed what to write and I remain honest.