Its so Important to Thank our Brilliant Teachers


In 2013 our family moved from Hertfordshire to East Sussex and whilst this has been the right move for our family for so many reasons, it is the children's schooling where I have been most pleased. Our three children attended a big town school in Herts where there were 500 students and very high attainment levels. Of course that's not a bad thing in general but it led of our children being just another pupil and not being seen for the unique individuals they are.

When we moved to East Sussex we looked at a couple of schools local to our new rural home but one easily stood out for us. The children's new school is a small Church of England School in a local village, it has around 140 pupils and only five classes for the whole school from reception through to year 6. I worried at first that these mixed year classes might hold my kids back but it has actually proved to be completely the opposite.

In 2013 JJ was 10 years old and heading into year 5 at the new school and the twins were 6 years old and going into year 2 and it was amazing, especially for JJ, to be judged on his merits of who he was at that time. JJ had attended his last school since he was 4 years old and they had watched him develop from an oversized pre-schooler with spacial awareness issues, to a troubled young boy who struggled to make friends and deal with change, through to the gifted ten year old he was when he started his new school. But his old school seemed to have stopped in their assessment of him and he was painted as a kid with issues and one who was a challenge to have in class.

Within a week of being in the new school he had received a Head Teachers Award for how well he had settled in and they truly seemed to be able to see him for who he really was and not who he might have been a few years back. It was amazing and lifted my spirits so much. I don't know if it is because of an exceptional Head Teacher that you get marvellous teachers in general or if a small village schools attracts them but whatever it is, I need to give a big thank you to Mr Payne, Mrs Lloyd, Mrs Cleaves and Mrs Gill in particular. 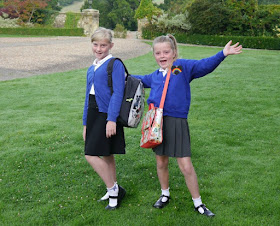 Back in 2015 I wrote a couple of blog posts about how pleased I was with the kids school. This first post from July 2015, titled, 'what a difference six years makes' is all about my son, JJ, and how he had grown and been recognised for his talents by Mrs Cleaves, his year 6 teacher. Just read this excerpt from his final report and see how well he had done -


"JJ has had a very successful year. Well done - he has shown an excellent attitude to learning and is very mature in his outlook.... He handles himself well in all aspects of school life. He is always reliable and dependable when asked to undertake any task of responsibility and has shown himself to have a love of learning.... He has a great sense of humour and has developed very positive relationships with his peers."

I remember being a little worried in September 2014 as JJ started in year 6 when he came home crying that it was all too difficult and he couldn't cope. This was my super smart boy and I wondered what on earth was going wrong. A quiet word with Mrs Cleaves reassured me that she was just pushing him to be able to achieve the best results and getting him ready for secondary, stating that he would settle and be fine within a couple of weeks and she was right. Her judgement of JJ and his needs were spot on, he was perfectly stretched.

He then went on to be in the top set for every academic subject when he started Secondary school and transitioned without a moments fuss. It was all so easy for him as he was used to the expectations of high standards and independent learning. Many of my friends with kids at the same primary school have all said the same thing, that Mrs Cleaves is the perfect teacher to get our kids ready for secondary.

Then in September 2015 I also wrote this Dear So and So post thanking the Head Teacher Mrs Gill for her part in encouraging and nurturing JJ as he started at Secondary school.

We have now rolled forward a few years and both my twin girls started in Mrs Cleaves class in September this year. I knew this would be great for Miss M as she is fairly like JJ, in that she is very smart and finds learning quite easy. I did wonder about Miss E though as whilst she is a little poppet she has dyslexia and struggles more in her studies. I had the faith to know that Mrs Cleaves would still do well for her but I wasn't sure how it would look.

We are now at the end of the first half term and I just asked Miss E, how she found Mrs Cleaves. 'She's nice' was the response. 'Oh good' said I 'does she suit your style of learning then?'  'She suits everyone's style of learning Mum, as she knows when to be strict and when not. She is very fair' was the response I got. You can't be disappointed at that evaluation, can you?

So in case I haven't said it enough already, thanks so much Mrs Cleaves. Thanks that when Miss M wasn't even in your class but was struggling with friends that you took her under your wing and gave her jobs so she could feel useful and keep busy and thanks that just this week Miss E came home with a certificate to celebrate her constant high level of effort. These things all make the difference and make you a cut above the rest. 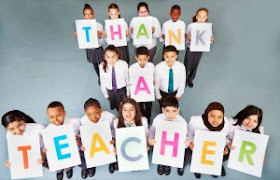 The Pearson Teaching Awards Trust is a charity set up in 1998 as a means of recognising and celebrating excellence in education ( the awards are open to every school in England, Wales and Northern Ireland). Each year they accept nominations, either direct or via the thank a teacher card route and then in April/ May those nominations are judged and Silver Award winners will be chosen. In June there is a national thank a teacher day and those silver winners are announced and celebrated.

Then in October there is the national award ceremony in London where Gold Plato award winners in each category are announced. This years ceremony was held on Sunday 22nd October and will be televised on BBC2 as ‘Britain’s Classroom Heroes’ on Sunday 29th October 2017 at 6pm. I know that I'll be watching this, will you?

So what are you waiting for? It takes just 5 minutes to nominate a teacher, head teacher, teaching assistant or whole team/ school and isn't it great to say thanks when these people have been investing so much time into your child's development?


Disclosure: I am being paid to work with Mumsnet to help promote the Pearson Teaching Awards. Everything I have written is true and I believe this is an amazing opportunity to recognise those teachers who go above and beyond the norm.