Light at the End of the Tunnel – We can Get Help! #aminumber5?

I remember being 12 when I headed to the toilet in the Happy Eater restaurant and saw that first flush of pink on the toilet paper. We were there as a family for Sunday lunch and the day wasn’t supposed to be any different to any other, but of course it was. In my mum’s words, ‘I had become a woman’ and on one hand I was very pleased to be growing up but on another I realized it was the start of something.

Not that my periods presented any problem for me for the first twenty years of having them. I was very regular, they were never too heavy and I just had a five day bleed. No, I certainly didn’t realize how lucky I was back then. The problems for me only started when I had my first child in 2003, after having JJ my periods returned far quicker than I thought they would considering I was breastfeeding and they didn’t just come back quicker, they came back much heavier.

Of course you can take care of the flow with the appropriate sanitary protection but what I found so hard to deal with was the pain. I can recall a day when I had to ring into work from my car as I had tried to drive there and I was doubled up in pain. I got myself to the doctors and asked to see someone and luckily they fitted me in. Mefanamic acid became my best friend and really did dampen the pain but each month there were still two or three days with very heavy bleeding (losing clots too) and almost unbearable pain.

I just learnt to live with it until I fell pregnant again about three years later. I’m really not sure why I didn’t seek more help, I just seemed to put up with the heavy bleeding and the pain, not knowing that I had menorrhagia, or heavy periods, a recognised medical condition.

I think many of us think it is just part and parcel of being a woman but whilst menstruation is perfectly normal for a woman, menorrhagia isn’t. If you are wondering if your bleeding is normal or heavy then do take a look at the Wear White Again website as there is really good, straightforward advice there.

I’ve now discovered that 1 in 5 women will suffer with heavy periods during their lifetime (1) and to help raise awareness of this I am very happy to take part in the Am I Number 5? Campaign. 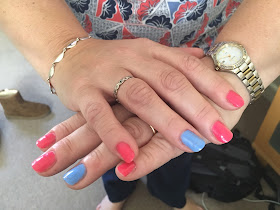 I’ve been having one nail painted a different colour to signify the Am I Number 5? Campaign, which you can find more details about on the website. To take part in the campaign yourself, simply paint one of your nails a different colour and upload a photo of your painted nails publicly to social media using #aminumber5? to raise money for women's health charities Endometriosis UK and Wellbeing of Women.

The time I was pregnant with my twins was bliss as I didn’t have to deal with any bleeding but I should have known that things weren’t to be well afterwards when I passed out in the night with the pain of passing clots a couple of weeks after giving birth. Within a few months my bleeding had lessened from the fountain it was after birth but it was still heavy and very painful at times. I just lived with this and used the Mefenamic Acid to help control it. Looking back, I seriously have no idea why I didn’t ask my GP for help. I suppose I was just too busy with two newborns and a three year old to focus on myself.

In early 2010 at 14 weeks pregnant I had a missed miscarriage and then I really learnt what intense pain and heavy bleeding were, I wrote about the embarrassment of it at the time.  Once I had mentally and physically recovered from this I went to see my GP who recommended the Mirena coil to try and regulate and lessen my bleeding and pain.

I had the coil inserted and was super pleased to find that the intense monthly pain went away. The Mirena coil never seemed to do for me what it did for most people and I continued to bleed but instead of around 7 – 10 days of chronic heavy bleeding I had moved to about 21 days or mixed spotting, light bleeding and some heavy days. But there was no pain and for that I was so grateful.

In 2015 it was time to have my coil removed and at this point we discovered the strings were missing, so I was sent for a scan where they discovered the coil had embedded itself into the lining of my womb, which was very thick and there were some fibroids. I went into hospital and met with a wonderful specialist gynae nurse who managed to remove the coil and insert another one. I talked to her about my bleeding and she felt confident the new Mirena coil with its full potency of hormone would help my periods and she told me to get in contact if it didn’t.

I have to admit I lost her number and over the coming months as the heavy and constant bleeding continued and in fact seemed to get worse I did think about contacting her but I kept wondering ‘what can be done?’ at least I don’t have pain anymore and the Tranexamic Acid helps to stem the bleeding a little.

So I just carried on, right until March this year when I was due a smear test and the nurse couldn’t find my coil strings (again!) and she was worried it had come out. So off I went for another scan and yes the coil was there, as were the fibroids and also this time a couple of cysts. A follow up scan six weeks later showed that the cysts had dissipated and I was sent away to get on with things.

Which I did, right up until I went to Spain with my family at the end of May and could only swim on one day as my bleeding was so heavy and erratic that I just couldn’t risk it. In June I went into my GP’s office and told her I couldn’t live like this anymore. I needed help. She was amazing and if you suffer with heavy periods, I’d urge you to see your GP and be really honest, we don’t have to live like this, having just a shadow of a life.

Just six weeks later I was again sent to the hospital to see the wonderful specialist gynae nurse and I talked her through what was happening. We agreed to remove my coil as it wasn’t actually helping and my birth control is in the form of constant bleeding anyway. She performed a hysteroscopy to look in my womb and a biopsy was taken too. I was conscious I was on a low bleed day so I hoped she would be able to see what I was making the fuss about. I’ll always remember her asking me if what she was seeing was normal and I laughed and said ‘no, this is nothing, it’s as if I haven’t even got a period today’.

It was amazing feeling to know that what I was suffering with was not normal at all. I’m now awaiting a date for my endometrial ablation, which is a quick procedure to remove the uterine lining which causes the heavy bleeding. It is lucky that my husband and I have already completed our family as this is a condition for this kind of procedure.

I have an appointment with the consultant gynae later this month to discuss being sterilized at the same time as having the endometrial ablation and I feel really positive that there is an end in sight to the problems that have now plagued me for around 14 years. I’m now trying to think of a suitably amazing way to celebrate being free of excessive bleeding and hiding away – wearing a white dress perhaps!

Update: It turned out that when I met with my consultant again he felt I wasn't a good candidate for the endometrial ablation as my fibroid was very big, so he talked me through a TCRE (Trans cervical resection of the endometrium), which is the operation I had in January 2018. 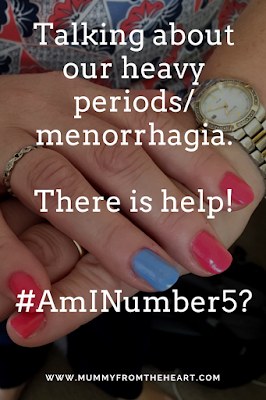 Disclosure: I’m working with Hologic and BritMums to promote the Am I Number 5? campaign. Visit www.wearwhiteagain.co.uk for more information and advice