Hogwarts in the Snow - Our Family Visit to Warner Bros. Studio Tour 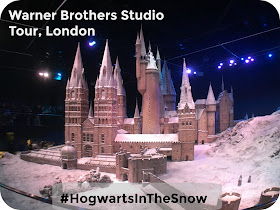 Last weekend we went up to Hertfordshire to visit my husbands parents and seeing as we were in the area we thought it really was high time that we visited the Warner Brothers Studio Tour again. After all, who doesn't love Harry Potter? The tour is advertised as being in London but it is actually on the outskirts of Watford and for me as a local of 15 years that will always be Hertfordshire. Not that it matters it just means it is super accessible by public transport from central London as well as being close to major roads such as the M25, A1M, M1 and M11.

It really is the easiest place to get to and with the brown attraction signs everywhere, you'll have no trouble. The parking lot is also enormous and has no charge which makes a nice change from many of the major UK attractions.You also do not get any traffic jams heading in and out, well we haven't on the two occasions we have visited and we went on weekends at peak times.

The last time we visited was about two and a half years ago and I wondered how much would have changed but actually I can fully advocate a second visit as many things had changed and of course there is also the special Hogwarts in the Snow Christmas feature running at the moment, from Saturday 19th November 2016 to Sunday 29th January 2017. I notice that most of December is already sold out, so if you fancy going, get in quick and book your January tickets now.


Hogwarts in the Snow is a chance to experience Christmas time at Hogwarts and discover how film-makers create fire, ice and snow that never melts. As Warner Bros. Studio Tour London undergoes a magical makeover you could be fooled into thinking that it is easy to make over the studios with snow and ice but actually a team of specialist staff work on it and my kids were able to touch all the different types of snow used. Each selected for its ability to float like falling snow, crunch under foot or glisten in the light like ice. It really is beautiful. 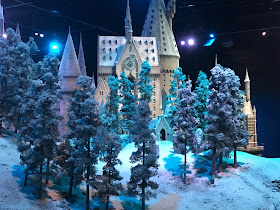 It was interesting to hear that during the filming of the Harry Potter movies that included snow, a member of the crew climbed aboard an elevated work platform and sprinkled the ‘snow’ mixture of granulated paper and grains of salt onto the model by hand with a sieve, just like dusting sugar onto a cake and the same process was used to transform the Hogwarts castle model at the studio tour for this very special Hogwarts in the Snow event.

As well as the snow there is of course a big Christmas theme going on and the highlight is seeing the Great Hall all dressed for the festivities with special FX lit fireplaces, flaming Christmas puddings, full turkey dinners and loads of trees and garlands.

There are also some great extras for this Christmas Hogwarts in the Snow special, such as -

Upcoming Events
The Warner Bros. Studio Tour is great at any time of the year, you don't just have to go at Christmas. Last time we visited was in the summer and there was a quidditch inspired event running and it is definitely worth keeping an eye on the website as they have special events all the time, a few coming up are - 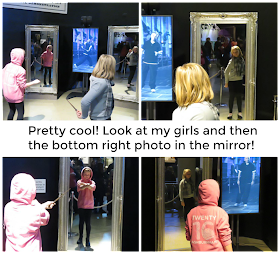 What happens on the tour?
You are probably worth reading the review I wrote last time to experience the studio tour through the eyes of someone who hasn't seen it before but here is a quick run-down.

Collect your tickets from the booth outside (if you don't already have them) and this is super easy, without any queues. You do then need to join a queue to actually get in the attraction, the hold-up is because you have your bag checked and a body scan. This isn't something that happened the last time we visited and to be honest it felt a little like lip-service.

Once inside the studio lobby there are plenty of toilets, a free to use cloakroom, cash point, studio cafe, starbucks and shop.

Our tour time was 11.30am and we arrived to collect the tickets at 11.10am as the instructions say you should arrive 20 minutes before the tour time. Due to the queues both for security checking to get in and then actually to start the tour (yes there was another even large queue inside) we didn't actually get into the tour until 11.50am and that felt a bit disappointing as we had arrived at the time instructed. I think we did choose the peak time as when we left at about 3.30pm, the queues were much less.

In that first room you are given some insight to how the films came about and a tour guide has a few fun games with you all. The guy we had really does have a talent for engaging people and making them feel welcome, it set the tone for the tour really well.

After this you head through for a short film in a very comfortable cinema and again you learn more about the making of the films and hear from some of the stars like Daniel Radcliff and Emma Watson. By the time the doors to the Great Hall are revealed you are really in the mood and ready to go though and enjoy the main attraction. 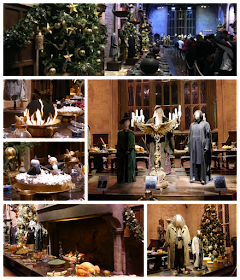 When the doors open to the great hall it is a real wow moment and you have time to enjoy everything on show in the room. A guide tells you about some of the exhibits and give some facts from the films.

Once you finish in the great hall, you are then allowed to move about the studio at your own pace. There is so much to see and read and you can also hire audio tours for £4.95 per person if you so wish. It seems a shame you have to pay more for these given that the tour price is already high though. 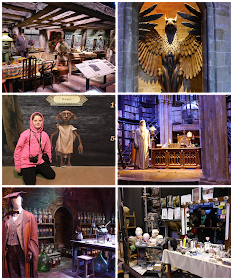 Within the first warehouse you can see many sets, costumes and props and also fly on a broomstick in front of a green screen or have a go at casting a spell. You can only go one way on the tour so spend as much time as you want to in this area as you cannot return and there are toilets towards the end by the Ministry of Magic sets.

New to us was the Hogwarts Express area with so many great photo opportunities. I love the fact that you can sit in one of the carriages of the train and you can chose the official photos or take your own like I did. 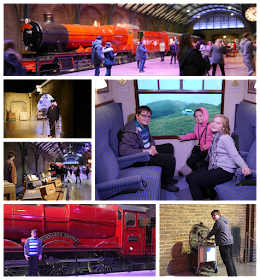 You then go through to the Backlot cafe and there is an outside space for picnics and many props to enjoy and have your photo taken by or in, like the flying car, triple decker bus and the house at Privet Drive where Harry lived under the stairs. We had a couple of sandwiches and some cold drinks in the cafe and the cost of a bottle of coke is £2.10, a sandwich was upwards of £3.50, a small potion of Mac N cheese with some salad was £5.95 and of course you can get the famous Butterbeer for upwards of £3.99.

Again there are toilets as you go through to the next stage of the tour and first up you are in the creatures room, which is somewhere I love with large video presentations talking you through some of the exhibits in that room and how many of the animatronic creatures were created. Next you go though to Diagon Alley, which is iconic to look at but sadly you can't actually go in any of the stores. Then it is through to some picture exhibits and white card models of Hogwarts and other sets to show you how they were planned and made.

The finale of the tour is the full model of Hogwarts and at the moment it is snow covered, as seen in the pictures above. Spend all the time you like in this area and it is great that it is shown in the dark and light so you get a full experience. You have one last chance to buy photos from the tour if you have had some taken in the green screen areas. The cost is £14 for one photo, £19 for a poster and £40 for a USB/ DVD and 2 photos. You also get a digital photo to share with each purchase. On this visit we didn't purchase any and were happy with all the photos we were able to take ourselves.

You end the tour by coming though the shop and boy what a shop it is. It is stunning and features some amazing items but as you might expect they do carry a hefty price tag. JJ fancied a T-shirt but at £19 he decided it was too much money and the girls just got themselves a 95p postcard each.

Conclusion
We had great fun at the studio tour. It is not cheap by any stretch of the imagination but it is amazing and for most, a once in a lifetime opportunity. For 2 adults and 3 children to visit, having booked in advance it would normally cost £147 but it is worth saving up and will last you at least three and a half hours, if not a lot more if you don't have small children to rush you through!

I think the TripAdvisor rating and reviews speak for themselves about this fabulous attraction. There are over 22,000 reviews on there and 96% of people have rated the attraction as very good or excellent. The overwhelming response was excellent.


Disclosure: We were given free entry for our family in return for an impartial review.  I have not been instructed what to write and I remain honest. Thanks so much Warner Bros.