Tranquility in the Craziness - Our stop at Hughenden National Trust 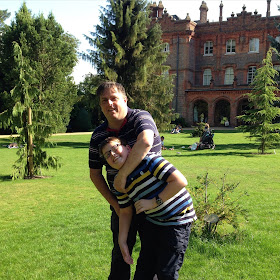 -
We had the journey from hell last week, it was pure craziness, all I could hear myself saying were things like 'kids, will you stop', 'be nice', 'no more whining' and 'this is not acceptable behaviour'. We were heading home from Telford and our journey should have taken us 4 hours without any stops but we had issues from the start.

Our slip road onto the M52 was closed as they had found a human skull there the day before, the M6 was a massive car park and then had a stranded car and by the time we got to Warwick services we had been travelling for nearly three hours. We thought a quick comfort stop and to eat our picnic was in order but we had to laugh when we were greeted with toilet queues practically out of the services and not a spot of grass in sight as about 8 coaches had all stopped together.

Once on the motorway again we realised that there was something wrong with the car, it couldn't seem to accelerate in the way it normally does and felt as if it was missing a beat and then I checked the motorway flow app for the M25 and found that our stretch had average speeds of 15 miles an hour. Oh, joy, more traffic! So in a moment of inspiration, I suggested to dh that we stop off at a National Trust site and enjoy a couple of hours there instead of another motorway services or the craziness of the M25. By this time we were close to High Wycombe and my National Trust app highlighted that we could travel to Hughenden within about 15 minutes of leaving the motorway.
The car was still being weird and I sort of hoped the engine management sign would come on so I could call the AA whilst we were at Hughenden, but no it seemed fine and we set off for a couple of hours of peace and tranquillity. As we arrived the weather had changed and we were greeted with beautiful sunshine and we felt the stress slip away from us all as we left the car and the confined annoying space to walk through the woods to Hughenden manor.

What a nice National Trust site this is, you walk back down from the car park (on a hill) through a wonderful shady woodland area and they are just creating a natural play trail alongside the path but if mobility is an issue for you I saw there were regular buggy transfers down to the main house, cafe and shop.

Our first stop was in an orchard where giant garden games had been set up and we all enjoyed draughts, domino's, Jenga and hoopla. It really was the tonic to too many hours in a stuffy car on a very hot day.

After a very nice half-hour, we headed down to use the loos and explore the main area. The house is beautiful and an easy one to explore. In truth, none of us had any idea who the previous owner Benjamin Disraeli was but we soon found out he was a Victorian Prime Minister and the kids were very impressed that Queen Victoria had eaten at the dinner table we saw. 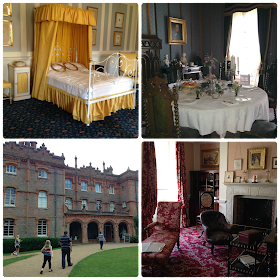 As well as the preserved rooms in the house it was very interesting to go down in the basement and see all the documents and history from the second world war when the house was used to draw up bomb-target maps. What an interesting conversation we had about chamber pots and rations!

Then up on the third floor are some recently opened rooms which explore more about Benjamin Disraeli as an author and show some exhibits from his colourful life but the room we loved best was the one where you can sit on high stools with a couple of pairs of binoculars and lookout to enjoy the Buckinghamshire countryside. You can see why he liked to live here.

As this stop was just a motorway avoidance tactic for us we didn't get to explore the formal gardens, the produce of the walled gardens or the wood and parklands but from what we saw anyone that did explore would not be disappointed. We finished our visit with an ice-cream and cuppa in the courtyard cafe and a browse around the NT shop.

After a quick couple of hours, we headed back to the car to get on the route as there was still a good 100 miles until we got home and as we drove out of Hughenden you could feel our car struggling and I prayed for our safety. Well, those prayers were answered as literally as we approached the roundabout to get back on the M40 the engine management light appeared on our car and we drove into a retail park instead.

Thank God for the AA, literally, they really do give such peace of mind and I would never be without my membership. About 90 minutes after placing our call our AA man arrived and spent 20 minutes or so tinkering. Diagnostics said we had a misfire and our car was only running on 3 cylinders and hence the sluggish driving. He checked all the connections and managed to get the engine management warning cleared and us back on the road for the last couple of hours of our journey.

By this time it was 7pm and the kids were hungry, so a speedy stop for a Maccy D's and we finally arrived home at 10pm. 11.5 hours after we started our supposed 4-hour journey!

It's not a journey I ever want to repeat but on reflection, it was no-where near as bad as it could have been. The car is now fixed and the kids are going back to school so peace will reign again once more!

Whoopie, I am ready for a rest!

Check out all our other National Trust reviews over here.