Films to Inspire your kids on Netflix #StreamTeam 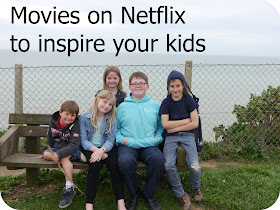 The other weekend JJ and I went to the cinema whilst the girls were at a cubs event with dh. The choice of film was JJ's and we saw Tomorrowland, a Disney movie about Casey, an inquisitive teen who is passionate about all things science. The film sees her on a journey to find Tomorrowland (certificate PG) and unearth it's secrets, helped by former boy-genius Frank (George Clooney) and android Athena. I didn't find it the most riveting film but I did really like the questions it raised about positively and what a difference it makes when you do not give up hope and always seek a brighter future. I tried to have this conversation with JJ and he told me in no uncertain terms that 'Dad is more fun to go to the cinema with as he just enjoys the film rather than pulling it apart'.

This did get me thinking about how many great films are out there that have messages that we hope our children will embrace, so I had a search on Netflix and asked some blogger friends what they would recommend as an inspiring watch for their kids.

1.  A few weeks back I watched the film Soul Surfer (certificate PG), which is based on a true story. It is a real heart-wrenching tale of an aspiring surfer in Hawaii who is attacked by a shark and loses her arm. Of course she thinks her dreams have come to an end as how can she surf anymore? But the film twists and you see how you never know what your true purpose is until you step out in faith. This was a wonderful movie and my girls watched it the day after I did and are now saying they want to be like Bethany Hamilton.

2.  What a classic tale Charlotte's Web (Certificate U) is and Claire at Emmys Mummy has recommended it because It teaches that anything is possible if you dream big and put your mind to something. That is definitely something we want all our children to believe.

3.  Go Diego Go! (Certificate U) Lucy at the Princess Poet Blog was the first one to jump on my request and told me she finds Go Diego Go! Inspirational as it has inspired her 4 year old to become more adventurous. "I love seeing him get wild!" She says and it shows there is value in sorts of TV shows and films. I know my family used to be amazed and think I was a pushy parent when my girls used to count in Spanish but no I just explained that is Dora the Explorer teaching that, LOL

4.  Sara at Walking with Angels recommended the awesome film Amazing Grace (certificate PG), which is of course the William Wilberforce story and follows his journey from rogue to a passionate advocate and campaigner who bought into force the anti-slavery laws back in the early 19th century. I love films like this that show how one average man can inspire a nation and make a difference. This is probably a film for your older children though as it has quite grown up content and some brutal language portraying the way the slaves were treated back then.

5.  Jennifer at My Mummy's Pennies says "We love watching Mulan (certificate U) I love how it shows my daughter that we do not have to be defined by traditional gender roles". Yes indeed, a powerful message for any child.

6.  I think one I'm going to get JJ to watch on Netflix is the Boy in the Striped Pyjamas (certificate 12). This is such a difficult yet tender film that portrays the friendship between two 8 year old boys living incredibly different lives; one the son of the camp's Nazi commandant, the other a Jewish inmate. This Holocaust drama explores the horror of a World War II Nazi extermination camp through the eyes of the boys,

7.  I know I titled this films but I can't fail to mention all the inspiring documentaries that are on Netflix and are aimed at kids. Things like The Blue Planet, Africa, Froze Planet and the Life of Mammals to name just a few.

8.  Dear Dumb Diary is a film we have not yet watched but this is my next one to sit down and watch with my 7 year old girls. Here is an extract from what just one of the reviews about it on Common Sense media says -

The story centres on a tween who's struggling to stand out among her (as she believes) more beautiful classmates, which leads her into a service project that eventually changes how she views herself and her peers. Its message is clearly illustrated: Outer beauty can be deceiving, but inner beauty transcends any exterior. The main character makes some poor judgement calls that lead her into trouble, but she makes amends each time and learns good lessons from the experiences.

Of course there are loads of films which sadly haven't made it into Netflix yet and perhaps they might in the future. Jen at Mum in the Madhouse recommended WALL-E as "It always starts great conversations on why we need to look after our planet and also the strength of love".

Both Liz at Me and my Shadow and Liska at New Mum Online recommended The Lorax. Liz says "That Seuss was ahead of his game, it contains Important messages of conservation" and Liska said .
"it has so many amazing messages about loyalty, friendship, the environment and seeing things through".

Cass at Diary of a Frugal Family was keen to input too, here is what she said - "I know it's not a particularly deep and meaningful film but you can't beat Toy Story 3 - it's all about friendship and growing up and I always get a tear in my eye when Andy leaves for college.  For older children, War Horse is an amazing one to watch with them to help them understand a little more about what people gave up for us to win WW2".

Thanks to everyone for their great recommendations, I hope you have found this useful, do leave me a comment if you can think of other films that will inspire children.