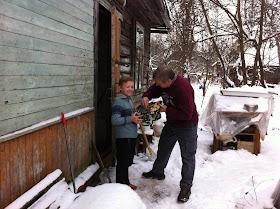 This is Andrew but pronounced Andrey when said with a Belarusian accent. He was just the most gorgeous boy that we met during our whole stay in Belarus. Yesterday at dinner I told my family about him and I kid you not both my husband and son nearly had tears rolling down their cheeks.

I'll tell you his story - 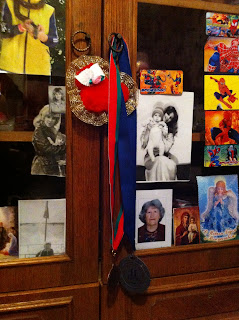 Andrew is now nine years old and has been living happily with his Babushka (Grandma) for the last three years, it is clear for all to see that they adore each other. We were proudly shown the medals that he had won in the local family fun days, apparently, he had run on behalf of himself, his mother and father and then his Babushka had taken her turn and they had come home with the medal! Very impressive and a good start to Andrew’s desire to be a ‘Speedy man’ when he grows up, that is a racing driver to you and me.

Andrews life did not start out anywhere near as happy. When you learn that he lives with his Grandma you automatically start to wonder where his parents are. It turns out that Andrews’s parents had not been married when he was born and in fact, his father had gone off to Russia to make a new life with his wife and children. Andrew lived with his mother for the first couple of years of his life but sadly she was not fit to look after him and he was taken into care and ended up in an orphanage.


During this time his Babushka learned of his existence and set about proving she was his biological father's mother, this was an expensive and lengthy process but luckily one that she won and Andrew was able to come home with her.  No wonder he is so happy now.  His first couple of years were spent with his mother who I do not really know much back history on but I do know she lost her parental rights through a lack of care for Andrew and she has now died.  He then spent about 4-5 years in the orphanage where he was just one of many abandoned children, it can't have made for a secure and happy young childhood Andrew now lives in a very basic house which is desperately in need of repair but it appears he does not see his surroundings as he feels blessed to be loved. He greeted us at the door of his house with a smile that could light a room. He started to look through his box straight away and then his Grandma called us into the house to take a seat and chat for a short while. 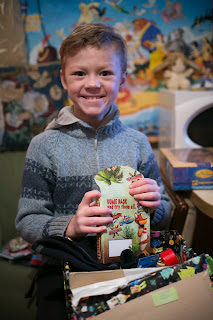 Andrew asked us who had made this box for him and his manner was very inquiring and you could tell it was important to him.  We informed him that children in the United Kingdom had made up the box as they wanted to send him some gifts.  When he saw there was a hand made puppet in there he asked us if he could make something to send to them to say thank you.  We told him his smile and photograph were enough......
And they will be enough for me for many years to come. I am sat here feeling so emotional as I type this. The children we met in Belarus were so respectful and giving and are a fine example to our own children. It literally churns my guts when I think of how much kids here have and how ungrateful they are for it. Don't gte me wrong my kids are no worse than anyone else's in the UK but you would have thought the world ended yesterday when I told JJ he was having a week without his computer.  I think maybe he learnt a little lesson himself when I talked about children over there of the same age as him never having used a computer.
May the Lord bless you, Andrew, I hope your dreams come true.
-------------------------------------------------﻿
This was my SoundCloud made on the last day on the trip and I think I might even have mentioned Andrew in it, he touched me deeply.