A Year of Valentines

This year has probably been one of my most favourite Valentine Day's ever and that is quite something coming from me, as it is not a day I have really celebrated or put much emphasis on for a few years now.

I've mentioned before that dh and I will have been together for 18 years this year and I do believe that as time passes and children come along, a little bit of the romance slips away.  Well to be honest with us, it has been a fair amount of the romance.  It does not seem to come naturally to either of us anymore to do all those little things that take a lot of thought and not a lot of money that you do so freely in the early days.

However, I think the beauty of our relationship is that we have not given up, whilst it is not second nature for us to just do impromptu, loving stuff we do both love each other deeply and want to make the other one happy. So every six months or so one or the other of us will do something to initiate a little more romance and emphasis on us.  We might reinstate date nights, book time out together, do some extra little jobs the other might nprmally do or something similar. In 2010 we even did a marriage course together and that was an experience I would definately recommend to anyone.  Our marriage was not in trouble, we just took the time to build on it.

So what made this year's valentine so good? Well, Mum is up so we had an instant babysiter and as I was supposed to be going out to my regular bible study group on Tuesday we had our valentines a day early and went out for a meal and then onto the cinema on Monday.  Perhaps not the most magnificent or imaginative of nights out but we enjoy it and that is what counts. The meal was hilarious as everything that could go wrong did, but did it spoil it for us?  No, on the contrary it made our evening fun and we had a great chat.

The film we went to see was 'The Vow' and wow, I loved this movie.  It had me laughing, smiling and even having a little cry.  I walked out with all my nails bitten off as I was so anxious, willing the stars of the movie to get it back together. It was an awesome film and one I will be buying and boy it must have had a good effect on dh.  All I said afterwards was how much the guy obviously loved his wife and that it made me want a guy who could show his love like that.

I won't tell you the ins and outs of my valentines present but suffice to say it did not cost the world but it was perfect.  There was so much thought in it and it was personal to us and also dh had based each of my small presents of a piece of bible scripture.  Something I am sure many people would not be interested in but as an active Christian it worked.  The boy did good!

As well as dh doing good I had a couple of lovely surprises Valentines morning. I was catching up with a few jobs and the doorbell went and there stood a Royal Mail delivery man with a super big parcel from Warner Bros. containing some great new DVD's for the kids to entertain themselves with this half term.


Then not 10 minutes later the door went again and yet another Royal Mail man stood there and handed me a box from Warner Bros.  For a quick second I wondered if groundhog day had arrived but no, this box was for me, all me! and what a treat it was....  take a peek. 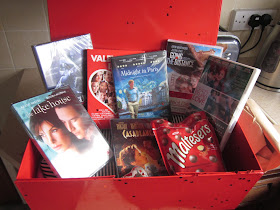 I have to say a big thank you to Warner Bros. as they have just sorted out my date nights for quite a while to come. Not sure how dh will feel when I submit him to The bodyguard, Valentines Day and Midnight in Paris but it is all in the name of romance and keeping our love on fire so that's a good thing! As I read one of my daily devotional emails today about how valentines should be every time we make an effort to be romantic and not just once a year I knew this was right and I booked in our next date night for Friday - 2 in one week.  Go Mich!

Here is to a year of Valentines, fancy joining me?  Well, you know what I mean, not literally me.  That is just for dh and I.
at 22:18
Share
‹
›
Home
View web version