Congratulations to @JoBeaufoix, JJ has picked you as the winner.  Your suggested name was his favourite but now he is asking me what a wench is??  Oh dear.  Anyway email or DM me your address details and I can pass them to the PR, who would love to send your DVD out tomorrow so it reaches you for Christmas.

Merlin has undoubtedly become one of the BBC's most successful dramas in recent years.  With around 7 million tuning in to each episode in series 3, series 4 sees the most dramatic change yet in the fortunes of the heroes and is destined to become the most exciting series so far.  This series started broadcasting on 1st October and runs for a few more weeks yet. I have been sent volume 1 of series 4, which contains the first 6 episodes for review by my hubby and JJ, who are both avid Merlin fans.

Whilst I indulgence in the froth of X Factor or such on a Saturday night my boys head upstairs together and enjoy a boys hour snuggled up watching Merlin.  The next best thing to Doctor Who is how they described it to me. JJ especially was happy to watch the same episode a number of times, whereas dh said that he would watch them more than once but would want a good time to pass between.

Dh said that Merlin is great because it is something that is suitable for all the family to watch together and there are not that many programs nowadays that capture the imagination of all ages. The story twists and turns and engages JJ. Once one episode finishes on a Saturday he is already talking about what may happen the next week.

I was surprised to see that the DVD has a 12 certificate.  This means that my 8 year old should probably not have been watching it, but of course TV does not come with a certificate so we had not known this and talking to dh he sees no reason why JJ should not watch.  He always watches it with his Dad and asks about anything he does not understand. I decided to take a look at the BBFC website and see why it was rated 12 and it appears that all the Merlin episodes that have been rated to date are PG cert with the exception of series 4, episode 4 which gained a 12 cert due to moderate violence. 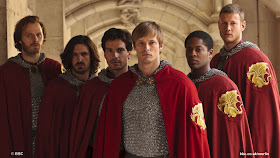 The series stars Colin Morgan, Bradley James, Angel Coulby, Katie McGrath, Anthony Head and Richard Wilson with John Hurt as the voice of the dragon and was released on 28th November.  It has a 270 minute run time and the DVD and Blu-ray come with extras such as outtakes, fan gallery, storyboards and deleted scenes.

If you have not watched Merlin before, take a peek here and see what it is all about -


Like what you saw?  Want to win yourself a copy of Volume 1 of Series 4?


Disclaimer:  I received this DVD free of charge for the purposes of this review.  I have not been instructed what to write and I remain honest.
at 22:45
Share
‹
›
Home
View web version