Tell your man the truth, or you might just miss out!

I was looking back through some old photos today and I was reminded of how different life was before the kids came along.  Now, do not get me wrong I would not change a thing but it was lovely then to just be able to decide to go away and disappear at the drop of a hat.


Roll back to December 1998 and dh (well he was just my boyfriend then) and I were working at a hotel for a large international chain, as per the years previous we were both working Christmas day and then the hotel would close for a few nights.  We had a superb night Christmas Eve and really enjoyed the party atmosphere and then straight back into it Christmas Day.  Once the guests all left and we had cleared up around 4pm all the staff sat down and enjoyed their turkey dinner together.  It was great, we were only 25 and hard work did not phase us.

The highlight of my day though was heading off with dh after our meal and opening our Christmas gifts, I have no idea what I bought him that year but I remember opening an envelope containing currency and when I looked at dh puzzled, he explained that on 27th December we would travel first class by Eurostar to Paris and we would stay in the 5* St James and Albany hotel for 4 nights. Ohh to have some spare cash again and enough time without kids to be able to do that sort of thing, what a difference it would make to our relationship I am sure. 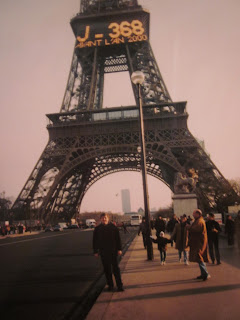 We took in all the normal sights of Paris and wondered around in the chilly weather hand in hand eating freshly cooked crepes, just as you would expect a young couple in love to do.  The whole time we were there I had butterflies in my stomach as I awaited a proposal. We had been together 4 years at this point, we lived together and we had talked about our future, what better place for dh to give me the much wanted diamond engagement ring? But as the days went past I grew more impatient and even joked to dh that he had not bought me any diamond jewellery this Christmas and that every year since we had been together he had bought me something diamond, be it a bracelet, earrings or my favourite solitaire diamond necklace that I still wear most days, even now fourteen years after receiving it.


We had a wonderful holiday but sadly we did return home with me feeling like something was missing as the proposal never arrived. We got home, I forgot all about it and life carried on as normal that was until we went away to Tenerife in the summer of 1999 and very late one night as we walked along the sea front dh sat me down and asked if I could see where the sea met the sky, I said no, it looked as though it was a million miles away and he told me that was how much he loved me and would I marry him.  At last the diamond solitaire that I had longed for was on my finger and I was due to be married. My ring was so special as dh had it made to his own specification, he knew what I would like and the simple classic round diamond set in platinum with an 18ct gold band was beautiful.

Roll forward a few years and dh and I were married and we were chatting about our trip to Paris and how great it had been.  I said to dh that I spent the whole trip wondering when he would propose and that whilst Tenerife was lovely Paris would have been something else. What he then told me taught me a big lesson!  He had planned to ask me to marry him in Paris, that was the point of the trip and the extravagance of first class and a 5* hotel but not remembered by me, we had a conversation back in November about getting engaged and I had said I was not ready and therefore he postponed.  I recalled the conversation he was talking about and I also remember saying I was not ready, I said it as I was testing the water and wondering whether he was ready.  Well being the non-communicative type that dh is, he said nothing at this time but took to heart me saying I was not ready.
﻿


So the lesson here ladies is to not play games with your man.  They do not get our ways.  Be straight with them and tell them actually how you feel.  Don't try and fish for information as you may just fall flat on your face like I did .... and yes I do just ask outright nowadays if I want to know something!

What about you, have you ever got yourself in a pickle with words?
at 09:04
Share
‹
›
Home
View web version