Today I Made My Boy Cry 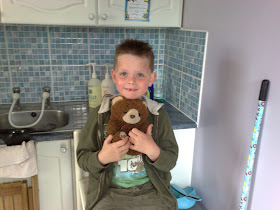 I didn't mean to but I think it had a purpose.
I have not mentioned here before but my gorgeous little man has a problem. He is totally self-absorbed and everything revolves around 'world JJ'. Now you may just think this is normal but it appears that all the other 6.5 year olds in his school have started to mature and have learnt the lessons of compromise, give and take, turn taking, empathy and the like. My little man likes to control every situation and when he can not he gets very frustrated and often, just recently, bursts into tears and can become inconsolable for quite some time.
Since he started school 2.5 years ago teachers have flagged to dh and me that he is slow on the uptake with his social and emotional skills. He has had smiley face charts, star charts, toot (talking out of turn) charts and such but there is still an issue. We do not really know what the issue is, no one has a name for JJ's behaviour but it has now got to the point where they want to have him assessed and dh and I feel it is right for this to happen. We want to give JJ the best help we can so he can develop to his full potential, whatever that may be.

It is not that he is silly, his report gives him a 2b in each of his learning areas, the average he is supposed to leave year 1 with is a 1a in each area. So he is 2 levels higher than the expected average and to some extent this makes it harder as people expect a lot of him as he is so bright.

I do not want to label JJ or place him in a box but I am keen that he does not get called naughty or bullish at school unnecessarily. JJ is a big boy, not fat, just tall and sturdy and this makes the problem worse as he can come across as a bull in a china shop. He runs into someone and knocks their teeth out (that was about a year ago - total accident but still, I felt so sorry for the little lad, thankfully the teacher was watching and knew it was an accident) but it does not even occur to him to stop say sorry and check they are OK. He shouts sorry and runs off and continues his game in World JJ.

Some of you reading this may consider what I have said as totally normal for a 6 year old but if you are with JJ for some time you start to see that his behaviour is different to those of his peers. It really saddened me to read in his referral document that JJ has no close friends as he drives people away with his need to control every situation. How to pull on a Mummy's heart strings! I could not even sign it the same day, I had to take the document home and digest the information and realise that yes a while back JJ did tell that no one plays with him at breakfast club anymore and also realise that yes, he hardly ever gets any invites to tea at peoples houses. I think I was kidding myself that was because I did not have many kids over to ours anymore but actually we have a load of un-reciprocated invites.

Luckily my little man is pretty happy in his own company and this does not seem to effect him too much but maybe things may change as he gets older and others start to go out together and he is not invited. The conversation we had this morning, that ended up with him crying was about how other people that he had considered to be his best friends hardly played with him anymore and that they had other best friends and did not seem to want to play with him anymore. I tried really hard to be sensitive in my explanation that we have to let others have a turn and to choose the game sometimes. I held him in my arms as he shed his tears and weep that his teacher had told the class not to just play with their best friends but to play with everyone and let people join in. Then he tells me the problem with that is that he does not like to play their game and wants them to play his, my soft explanations and sympathy appear to fall on deaf ears and that is why I know there is some kind of problem somewhere. You can not rationalise with JJ.
He must have some capacity to learn the lessons as we talked a lot about respect, especially respect for the responsible adults in his life. Then this morning at the park he was playing around after I had told him it was home time and when I firmly stated 'JJ, get off the slide right now' he stopped and I visibly saw him process this and jump off the slide and come to me, so obviously I gave him massive praise and told him he had showed me respect. There was also another good example of him thinking before speaking when we were out to lunch today but then this evening he decided to do what he wanted instead of listening so off he went to his room for some thinking and time out.
This parenting lark takes so much from you though, today I have had to be fully 100% switched on for the whole day to keep spotting him doing something good and to praise him for it. Generally it has been a good day.
So the school have had a speech and language therapist see him already and that person did feel there is an issue to be investigated. He has an appointment for Wednesday at the doctors for a pediatric assessment and the aim is to get him a referral to a communication disorder clinic - what that means who knows. Time will tell and I will keep you updated here.
Thanks for reading, any comments from any parents who have been in a similar situation would be most appreciated.
at 15:04
Share
‹
›
Home
View web version