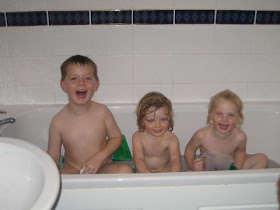 They are trying me at the moment. I am working hard to keep my temper and patience and not always succeeding!
Miss M is the worst one - so defiant, always saying no, running in the opposite direction and not wanting to eat much at the moment. She has a cold and I assume feels a little crap but with the amount of fuss she creates you would expect her leg has been cut off!
Miss E is generally a little poppet, but she can whine for Britain. Happiest left alone, her brother and sister like to take over her games, steal her toys and generally annoy her.
JJ is so absorbed in his own world it is not true. We have blocked all the TV channels again except cbeebies, Nick Junior and Disney playhouse as we find as soon as he watches stuff like power rangers, Horrid Henry his behaviour just goes off the scale. TV is like E numbers for him!
I was so pleased for them to go to bed today as I need some rest. Miss M is having me up at least once per night and then waking at 6.30am. Me and dh just never seem to get a lie in.
I have attached a cute piccie to remind myself that they are not always complete pests!
at 21:06
Share
‹
›
Home
View web version