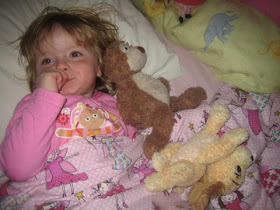 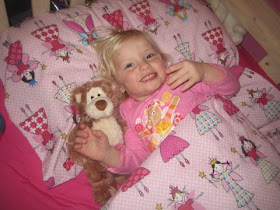 So having failed the first attempt at the goodbye nappy operation we have moved on to goodbye dummy.

Saturday tea I instigated the conversation with dh of when we were going to get rid of the dummies. Next thing I know he is telling the girls their dummies have gone to nannies for new babies and they are big girls now. Wow, that was quick!

They were only having their dummies at nap and night times for the last 6 months or so, so they have got used to that but I have noticed that they have reappeared a bit more at the 5/6pm witching hour just recently.

So we have had 3 nights now without dummies and they have missed them and getting them to sleep has been difficult as they keep asking for their beloved friends but we will get there and dh and I are quite adamant that this is the end and there will be no more 'dum dums' in this house. You have to stop at some point - right!

So tonight I pray that Miss M sleeps through the night and does not wake every 30-45 minutes like she did last night. At 2.30am ending up with her head on my pillow (shhh I enjoyed the snuggle with her!).

Yesterday they raided their change bag at Nannies house and found 2 dummies we had not removed (whoops) and both popped them in their mouse, like a smoker who could not wait for their next fix, until mean mummy told them they were yuck and broken, both girls pulled them out of their mouths like I had said they had a snake in their and we ran to the bin and chucked them in there with big shouts of yuck! Very symbolic and I suppose at least they know they are not accessible now. They keep telling me that 'dum dums in the dustbin, dirty!'
Enjoy the piccies of my beautiful girls snuggling up for the night without their dummies! Miss E at the top and Miss M below her.
at 22:16
Share
‹
›
Home
View web version